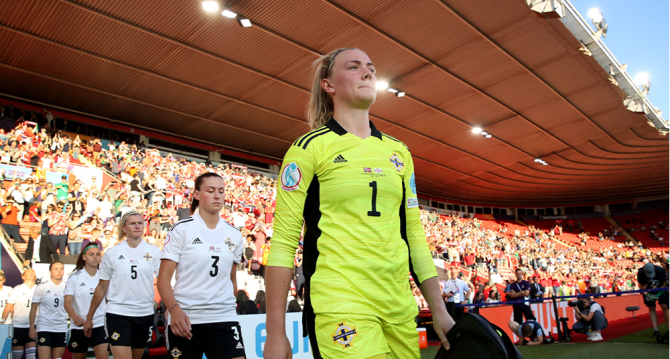 NORTHERN Ireland Women's international goalkeeper Jackie Burns, coming off her team's history making EURO 2022 journey, spoke exclusively to the Tyrone Courier to reflect on the Cookstown native's own journey throughout the tournament, as well as her plans for the future.

“Overall it was just a great experience.” Jackie said. “Words don't really describe how incredible it was because you're walking out in front of thousands of people and the fact that we had so many fans there, it was amazing, honestly amazing. I'm always going to remember walking out and hearing the massive roar of Northern Ireland fans.”

She continued, “I think that's something that all of us are taking away from the tournament: just how proud we were to walk out for them.

“For the Austria game we kind of held off walking out just so that we could embrace every moment that we could with the fans. It's something that you take away from each game, just having that appreciation from everyone.”

Speaking on the games themselves, Jackie said: “Every game was hard, but we expected that. I don't think we showed that we were far off the standard. We actually put up good fights with these teams, it was just unfortunate that we didn't get any positive results at the end of them, but there's lot of positives to take away from the tournament overall.”