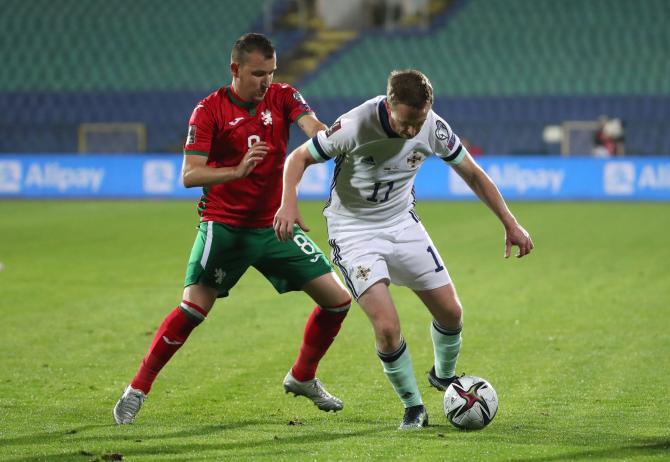 Northern Ireland were punished for a lacklustre second-half performance as they fell to a 2-1 defeat in Sofia this evening.

Ian Baraclough's men knew a second place finish in the group would be optimistic at best after the defeat to Switzerland on Saturday night but any slim hopes are now over.

The Green and White Army made four changes to their starting line-up - including a first start for Conor Bradley - but it would be the hosts who would have the first attempt on goal as Kiril Despodov's free-kick was straight down the throat of Bailey Peacock-Farrell. At the other end, Northern Ireland would have a sight of goal as Jordan Thompson tested 'keeper Ivan Karadzhov from about 20 yards with a low drive.

Bulgaria - who were well beaten by Lithuania on Saturday - thought they had made the breakthrough as Ivaylo Chochev's header from Despodov's corner almost crept into the net. However, Baraclough's men would spurn a great chance on 17 minutes as Shane Ferguson's cross found Paddy McNair in a good position but somehow he could only head into the gloves of Karadzhov.

After Thompson would have two attempts at goal, Northern Ireland would take the lead on 35 minutes as McNair's cross was met by Magennis, and after his header was parried, Conor Washington pounced from close range. The goal was initially disallowed for offside but VAR intervened and Washington was able to celebrate.

Despite holding the lead at half-time and looking comfortable, the hosts came out brightly in the second-half and equalised on 53 minutes. A cross into the box was deflected by Tom Flanagan into the path of Todor Nedelev who finished expertly into the bottom corner.

Unsurprisingly, this sparked the Bulgarians into life and Peacock-Farrell was forced to save from Ivaylo Chochev from distance. The momentum would yield a second goal for Nedelev and what a touch of class it was. The midfielder picked up possession at the edge of the area and hit an unstoppable effort into the top corner on 63 minutes.

Stuart Dallas and Jordan Jones would be introduced from the bench but the only meaningful effort of note would land at the feet of McNair but his drilled strike was blocked by last ditch defending. Minutes later, Northern Ireland would be awarded a free-kick at the edge of Bulgaria's box but the second-half performance was summed up when Thompson's strike went miles over the crossbar.

The Qatar dream is now over for Northern Ireland who are now 4th in the group ahead of the final two qualifiers against Lithuania (H) and Italy (H) in November.