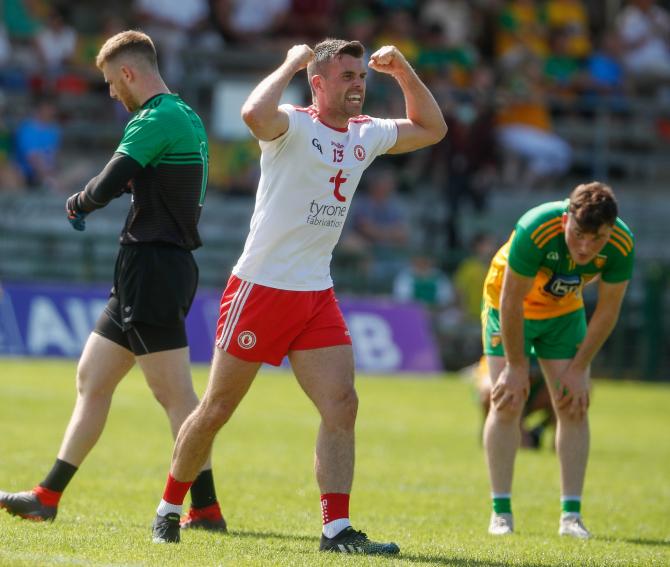 Frank Burns has revealed the weight of pressure that the Tyrone players were under to break a virtual Donegal monopoly on Ulster final appearances.

Donegal have competed in nine of the last ten provincial deciders, while the Red Hands managed to qualify for just two during that period, their last in 2017.

But the sequence was broken as the fierce derby rivals went toe-to-toe yet again, with Tyrone coming out on top in Sunday’s memorable semi-final.

“Donegal were going for possibly ten out of eleven Ulster finals if they had won,” said Burns.

“They haven’t been coming about for us too often in the last number of years, but thankfully we’re back in one.

“This is what Tyrone fans expect, isn’t it?”

The north-west neighbours have been frequent Ulster Championship opponents in recent seasons, with Donegal holding the upper hand.

Anticipation of this latest meeting was as acute as ever, but for the players, the challenge was to blank out all the external noise and maintain a sharp focus.

“You just try and listen to what’s going on inside our circle of players, and not focus on too much of what goes on outside.

“We meet these boys every year, and we know each other inside out. They know us inside out, we know them inside out.

“We know there’s never much between the teams. We knew it was going to be a massive challenge, but we’re just thankful we got over the line.”

Burns insisted that self-doubt never crept into the thinking of the players in the wake of a six-goal NFL semi-final hammering by Kerry.

They maintained a positive approach as they took the learnings on board as part of their preparations for Championship.

“Definitely it took us down to earth a bit, but we didn’t really doubt ourselves at all.

“We know Kerry are a serious outfit, and we know we’re not that bad.

“We’re Tyrone men, we went back, we put the heads down and we put in a tight shift for four weeks to get ready for the Ulster Championship, and just picked ourselves up off the floor again.”

The dismissal of Donegal captain Michael Murphy just before half-time on Sunday was a huge moment in the Brewster Park encounter.

Without their talisman and spiritual leader, they faced a huge test of character, and his loss ultimately proved too great a burden.

“Michael Murphy is a top player, he’s so dangerous. There’s no doubt if he had stayed on, the game would have been completely different.

“But they went a man down and we had to manage the game, and there were good forwards came off the line and we saw it out well.”

Tyrone’s transition to a more offensive style continues as a work in progress, but a 23 points return at Brewster Park suggests that they are getting there.

“I suppose we’re playing on the front foot a wee bit more this year, but we were evolving to that anyway under Mickey (Harte).

“The game has just evolved that way and all teams are playing more on the front foot.

“It’s definitely more attacking, it’s a bit more open, you saw that with the Armagh-Monaghan game, it was like a hurling score – 29-27. That’s just the way the game has gone.

“We’re happy with the new management in this year, there’s new energy about the thing, and it’s just that sometimes you need a change.

“There’s different energy I suppose. Mickey, Horse and everybody with them were unbelievable, but now we have a bigger backroom team, there’s more hands on deck and everybody is pushing the thing on.

Monaghan await in the Ulster final, buoyed by their defeat of Armagh in an epic Pairc Esler encounter on Saturday.

“They’re a very good outfit, they’re very strong from one to 26, the players they were bringing off the bench, some of them have played with them for years.

“Monaghan is going to be a massive challenge, they’re looking like a serious outfit this year.”

Full reports, photos and analysis from Tyrone's victory over Donegal in this week's Courier.