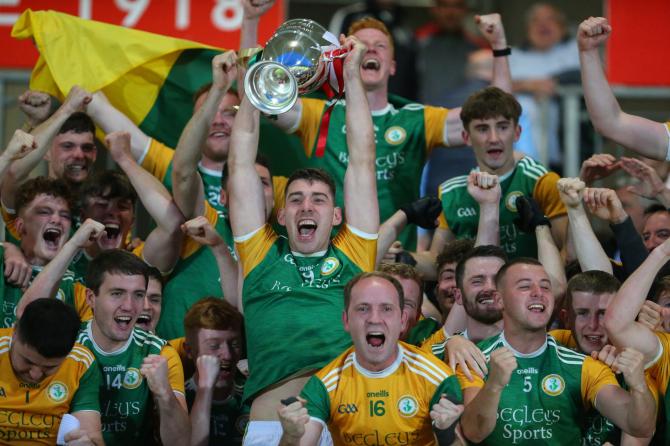 Dungannon Clarkes are determnined to repeat last year’s heroics when they won the O’Neill Cup.

Many decades have passed since Dungannon Clarke’s have featured as a theme in any conversation about potential Tyrone champions.

But now they’re at the heart of the pre-season chat, thanks to last year’s sensational O’Neill Cup win.

However, the title-holders are just one of as many as a dozen teams being touted as 2021 contenders, such is the unpredictability of the Red Hand series.

Covid failed to temper the ferocity of last year’s series, nor is it likely to diminish the latest offering from Ulster’s most enthralling championship.

The Clarkes went to extra-time in every single game, and to a penalty shoot-out in the final, on their way to a first senior title triumph in 64 years.

“Our secret is out. We have to raise our standards, and expect that everybody else will be coming out gunning for us,” said manager Chris Rafferty.

“From our own perspective, it’s a privilege to be county champions, and we intend to conduct ourselves in a manner appropriate to that, and we would be very conscious of that.

“It’s a massive challenge and to be honest, we’re looking forward to it. Everybody will just be happy to get back playing football.”

The sudden death drama offered by one of the few county championships that continues to operate in a traditional straight knock-out format is a huge element of what makes the Tyrone series so enthralling.

With no second chances offered by way of the back door or round robin, it’s all or nothing on the day in every single game.

“Tyrone tend to get criticised because of the conservative nature of its championship, but the one thing about a straight knock-out competition is a levelling off in terms of competitiveness,” said Rafferty.

“You take any one of ten or more teams will feel they can go for a county title this year.

“The competition is fantastic in so far as that it is very close, and that makes for a better spectacle.

“And I think it’s better than what we see in other counties, where one team might dominate for four or five seasons.”

No team has retained the O’Neill Cup since 2005, when Carrickmore achieved back to back successes, and in the meantime, no less than eight different clubs have claimed the title.

That’s a measure of the competitiveness that defines a competition with real box office appeal.

“Dromore and Carrickmore are coming again, Ardboe have a lot of youth coming through, and that’s before you even go to Trillick, Errigal Ciaran, Coalisland, Omagh, Clonoe.

“And you have Edendork and Galbally coming through.”

The Clarke’s went all the way last year without a single county player in their team.

That has changed, however, with Tyrone call-ups for ace attacker Paul Donaghy and dynamic wing back Mark McKearney.

“It’s due recognition, and we like to see them succeed, we want them to achieve better and greater things,” said the manager.

“So we don’t think that there’s a conflict in it, we have embrace the fact that they have been asked to step up a level, and deservedly so.

“If this year goes the same as last year, in a split season, county football and club football will be two distinct entities.”

The age profile of a young Dungannon side means they will approach the new season fortified by continuity and togetherness, with no talk of retirements threatening to fracture the group.

“There are no imminent retirements, we don’t have anybody over the age of 30.

“We would be optimistic that a couple, maybe as many as three, would be ready to come in from last year’s minors into the squad.

“It’s just a matter of bleeding them into the environment, and then after that, let them compete for positions.”

Until Dungannon’s breakthrough last year, smaller towns like Trillick, Coalisland, Ballygawley and Dromore have found the formula for success on a regular basis.

It’s an issue of concern for the county board, who are keen to promote increased participation in areas with higher population levels, and Dungannon’s triumph is a step in the right direction.

The Clarke’s boss would like to see other urban units draw inspiration from his club’s achievement.

“We would be happy to see Cookstown doing well, and also Strabane, although they are further removed geographically.

“We all suffer from the same difficulties that an urban club has.

“We are effectively competing for the attention span of children and participants.

“It’s a fantastic supporting town in terms of sport, but with that comes a competition level, where we are always competing for the most talented children at under-age level.

“The boy or girl that’s great at gaelic football will probably be good at hurling, or basketball, or soccer.

“They tend to be multi-talented, and there are a lot of pulls for their attention.”

But he expects success to breed a spike in interest and participation at O’Neill Park.

“Hopefully our profile will add to our competitiveness in that regard.”

“It gives us a massive lift in terms of our profile to promote our sport within an urban environment.

“In Ireland, across the board, the tradition has been that rural communities thrive more than town teams.

“It’s something that we are conscious of, and we’re lucky to be in a position where, as county champions, we get to promote the game, and hopefully that will translate into more participation across the board.”

Covid restrictions prevented the majority of Dungannon’s support base from sharing the journey with the players in 2020, forced to follow the action online from their homes.

Rafferty predicts a spike in interest and a rush for the turnstiles as soon as crowds are permitted to return.

“We did our entire journey largely behind closed doors, with limited crowds.

“The crowds were tiny compared to the appetite, and I would expect that whenever they do open the gates to crowds, that across the board, club football is going to go through the roof in terms of spectators.”

Dungannon Clarke’s chairman John McNulty believes a missing ingredient – grit and determination – was added to the mix in a rejuvenated team that refused to accept defeat at any stage of a tumultuous 2020 season.

“The Clarke’s may have been criticised over the years, maybe over that determination and grit to get over the line,” he said.

“It’s sometimes more important than how good a footballer you are.

“But last year, the determination and that never say die attitude warmed to a lot of people, and it’s one of the attributes that people love, to see a team refusing to give up.

“And when you refuse to give up and just keep going, it can take you places.

“If we were looking at the most impressive thing and the most rewarding thing for us, it was the development of that mentality, and once you get that going, it’s a big weapon.”

Levels of self-belief grew with each passing game as Dungannon held on in a series of extra-time thrillers.

“The last few minutes of a game can tend to play out in slow motion, and if you can compose yourself, which our lads did manage to do, you can nail down opportunities, whereas in the past, they might have panicked and not availed of them.”

Now the kings of Tyrone football are preparing to meet the challenge that every champion must face.

“We’re looking forward to the first few games as county champions, and to see teams coming to O’Neill Park really determined to beat us.

“That steadfastness and the attitude which you bring to the table for the next year, we all know how we would love it to play out, to prove ourselves as real champions and defend our title.