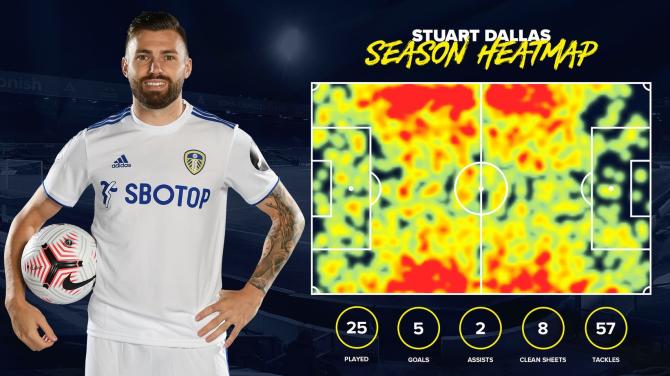 The amazing “Season Heatmap” which shows the areas on a football picth covered by Leeds United star Stuart Dallas this season so far.

Stuart Dallas' form this season for Leeds United has been red hot.

And a “Season Heatmap” showing how the Cookstown man has covered virtually every blade of grass on a football pitch has got Leeds fans singing his praises even louder.

The Premier League side released the incredible graphic after their victory over Southampton last week, under the heading: “Water covers two-thirds of the earth, Stuart covers the rest!”

Dallas was superb during Leeds' 3-0 win over the Saints where he scored a brilliant goal with a toe-poke.

“The Cookstown Cafu” is absolutely vital to this Leeds side under Marcelo Bielsa. The Argentine loves players who can perform multiple roles and he is getting the best out of the Northern Ireland defender.

Dallas, 29, has mostly played as a left-back this season. However, he was shifted to right-back after both Robin Koch and Diego Llorente got injured - and also played in midfield at times.

He's a firm fans favourite, and after the heatmap was made public on social media, they love him even more.

One Leeds supporter wrote: “Don't think there's anybody else in the premier league or other European leagues for that matter that can do what Dallas does for Leeds. Plays everywhere and can do everything. Probably the most underrated player in football today.”

Another wrote: “Has to be up there as one of our best players. Absolute work horse and fantastic all over the pitch.”