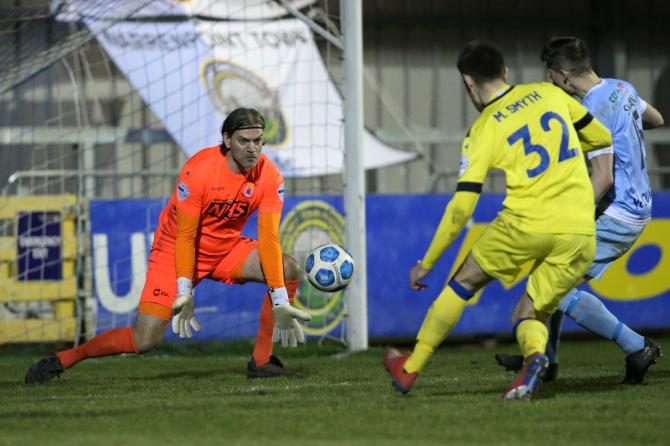 Long-time coach Robinson was entrusted with steering the Stangmore ship after it was announced last Thursday night that Lindsay had left the club by mutual consent.

The revelation came 48 hours after Swifts had drawn 1-1 away to Warrenpoint Town.

The announcement brought a disappointing end to the young manager’s tenure with the Swifts, and club chairman Keith Boyd wished him well for the future, adding that he had “made a friend in football with Kris”.

Swifts are bottom of Danske Bank Premiership table, but it’s a three-way split, with Dungannon level on 12 points alongside Portadown and Carrick Rangers.

Interim boss Robinson should have overseen his first game last Saturday against Portadown at Shamrock Park, but the match was called off after the pitch failed a 1pm referee’s inspection following heavy rain.

Instead, the Stangmore stalwart will begin his reign tonight at home to Glenavon, followed by another home clash on Saturday against Glentoran (5.30pm kick-off, live on BBC iPlayer).

The highly-experienced Robinson, head of youth development at Dungannon, has been put in charge until the end of the season, but that could still amount to 21 games if the Irish League manages to complete a 38-game season.

The threat of relegation, of course, is no longer an issue after the Championship season was declared null and void.

That gives Dungannon a bit of breathing space before naming a new boss, and the chairman says they are “in no rush or panic”.

Boyd also revealed they have already had a number of enquiries from interested parties about the position.

“We have had people sending us emails already about the job but we are in no rush or panic,” Boyd told the Sunday Life.

“There is no relegation this season and, going forward, we will take our time and as always the Board will consider what is best for the club.

“We are in the top flight of Irish League football for 18 years and when you think we work with a small budget, that’s an exceptional achievement for all involved over the years with Dungannon.

“We want to stay in the Premiership but know that is getting tougher and tougher so this is a very important appointment.”

Boyd also said that Lindsay’s depature came after he and the 37-year-old “had a chat and came to an agreement”.

“Kris is a good, honest, decent fellow but it just didn’t work out which can happen in football,” said Boyd.

“He didn’t get the sack. The two of us had a chat and came to an agreement.

“I think Kris is a good coach and I wish him well in the future.”

More coverage from Stangmore Park in this week's Tyrone Courier.