‘Massive’ week ahead for Dungannon Swifts 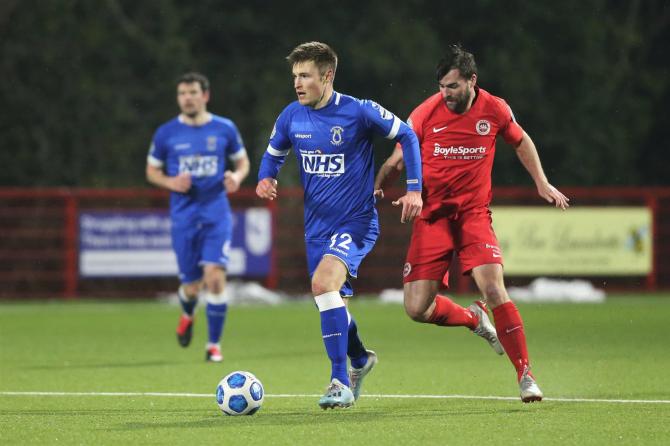 Matty Smyth drives forward for Dungannon Swifts in their 3-0 defeat to Larne on Saturday evening. Smyth was named Dungannon’s man of the match. SC210772

Dungannon Swifts manager Kris Lindsay has admitted his side are facing a “massive” week of football.

Results at the weekend saw Swifts slip to the bottom of the Danske Bank Premiership on goal difference.

While Dungannon lost 3-0 away to Larne, Carrick Rangers stunned Crusaders at Seaview with a 3-1 victory, and Portadown secured a point with a late equaliser at home to Cliftonville.

It means Dungannon are in bottom position in the league table, level with Carrick on 11 points.

Both clubs trail 10th-placed Portadown by a single point.

Although there is no relegation from the Premiership this year after the Championship season was declared null and void, pride is still at stake and no club wants to finish in last position.

After Saturday’s defeat, Lindsay must lift his players for two crunch games, starting tonight (Tuesday) away to Warrenpoint Town, and then on Saturday they travel to Shamrock Park to take on Portadown.

“It’s always disappointing when you get beat but we’ve got to move on from it because we’ve a massive week coming up against Warrenpoint and Portadown,” said the Dungannon boss.

“It’s important that we’re positive. We need to get points on the board. There’s no getting away from that. We’re bottom of the league. So we need points and that has to start this week in the next two games.

“We do have the players but we need to perform. We haven’t done that enough this season. We need to step up to the plate and try and build some momentum.”