Season is far from done and dusted, Lindsay warns players 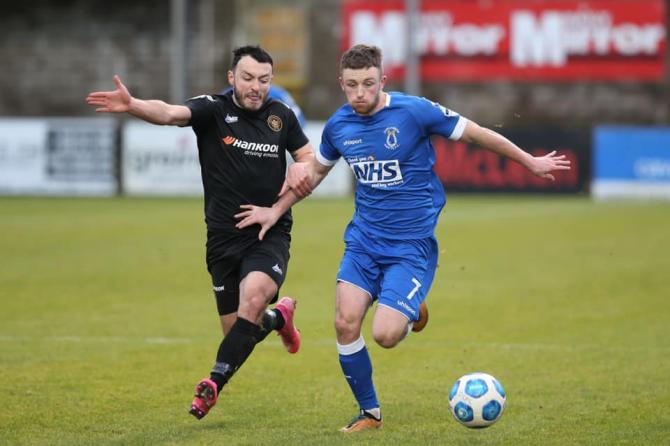 Dungannon’s Caolan McAleer in a duel with his Carrick counterpart at Stangmore Park on Saturday.

Kris Lindsay has warned his Dungannon Swifts side they’re each playing for their futures over the remainder of the season.
The threat of relegation has evaporated after the Championship season was last week declared null and void - meaning the Premiership trapdoor has been firmly shut closed this year.
But Lindsay has put his players on notice that the absence of relegation does not mean any of them should let complacency creep into their game.
And their future at Stangmore Park depends on them heeding his warning!

“I’m not going to lie, of course it’s a massive pressure off us,” said Lindsay, referring to the fact there’ll be no relegation.
“It’s a massive pressure off Carrick. It’s a massive pressure off Portadown.
“But we can’t afford for people to think that the season is done and dusted, and coast through to the end of the season. That’s not happening.
“We need to get points on the board. We still don’t want to finish at the bottom end of the table.
“Players will be out of contract so ultimately they’re playing for their futures. Others, the younger ones especially, need to prove they are capable of playing in the top league in the country.
“That’s the challenge for the players. You’ve got to show you want to be here. You’ve got to show a desire to play in this league no matter who you’re playing against.”
Lindsay issued his warning after Swifts slipped to a 2-0 defeat at home to fellow strugglers Carrick Rangers on Saturday.

Next up for Dungannon in the Danske Bank Premiership is a home tie against Crusaders tonight (Tuesday) and then an away trip to Larne on Saturday.