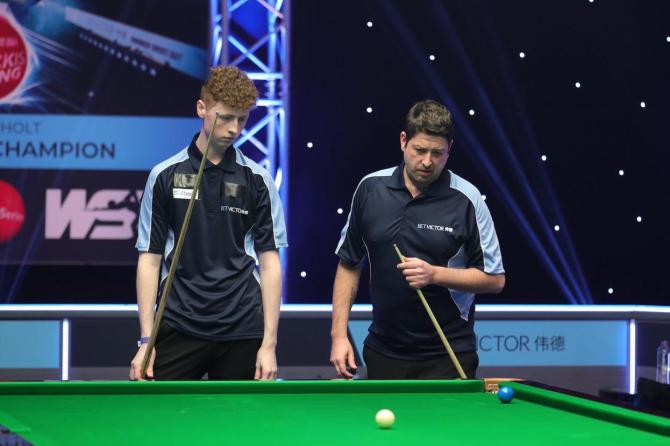 Fergal Quinn, left, was narrowly beaten by Matthew Stevens at the World Snooker Shoot Out.

Fergal Quinn was remaining philosophical after his agonising 55-53 defeat to Matthew Stevens in the World Snooker Shoot Out last Thursday.
The Brocagh man – making his professional debut live on Eurosport at the Marshall Arena in Milton Keynes – looked to be on course for a shock victory over the former Masters champion and world number 39.
But the “Welsh Dragon” had a sting in his tail and potted blue, pink and black in the final 19 seconds to sink Quinn’s dream of making the next round.
“It was a sickener to lose but it obviously happened for a reason,” Quinn told Courier Sport.
“I definitely held myself together quite well, although I was shaking for my first couple of shots.
“I played a better frame than Matthew, and I’ve lost - but that’s just how it goes.”