No league action for Tyrone until April at the earliest 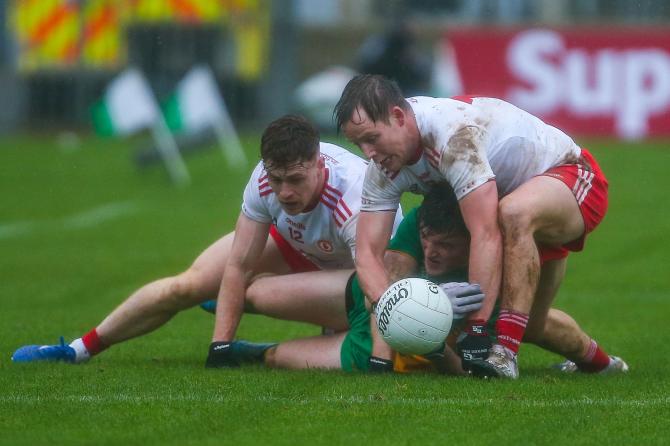 TYRONE will have to wait until April to get their season under way, and the delay could prove to be even greater, depending on trends, data and restrictions related to the Covid-19 pandemic in the weeks ahead.

The GAA’s management committee will review the situation again on March 5, and in the meantime, no training or games are permitted to take place.

Given that inter-county teams are to be allocated four weeks of pre-season training, the National Leagues will not start until April at the earliest.

The frustration and uncertainty continue for new Tyrone managers Feargal Logan and Brian Dooher, who face another lengthy wait before they are able to get their squad on to the training pitch at Garvaghey.

In the meantime, the players, many of whom are new recruits to the Red Hand panel, must continue to follow their individual training regimes in isolation, using programmes devised by Strength and Conditioning coach Peter Donnelly.

The situation is similar on both sides of the border, with lockdown extended until March 5.

The Leagues had been due to begin on the last weekend in February, but it has been clear for some time now that the planned schedule will face significant adjustments.

With the National Football Leagues re-structured in a compacted, regionalised format, the competitions could still be played in full without undue further disruption.

Tyrone will compete in Division One North, a section consisting of just four counties, which will see them come up against Ulster rivals Donegal, Armagh and Monaghan.

However, the delay to the start of the National Leagues will lead to a knock-on effect relating to the Championships, which could see a delayed start, and the All-Ireland finals moving from mid-July to August.

The draw for the Championships is due to take place later this month, and unlike last year, is not scheduled to be played on a straight knock-out basis.

The Qualifier rounds are to be restored for the forthcoming race for the Sam Maguire Cup, having been removed in 2020 due to time constraints brought on by the public health crisis.

And the Red Hands paid a heavy price for the switch to a sudden death format, with no way to get back on track through the back door following their first round Ulster Championship defeat to Donegal at Ballybofey.

Tyrone are due to face Derry in the semi-final, and no proposed date for a rescheduling of that game has been possible.

The players, who have already had to deal with three postponements in the series, have continued to maintain fitness levels in readiness for a call to action at short notice.

But their hopes received a further setback at the weekend when Ulster Council secretary Brian McAvoy delivered a bleak assessment for the prospects of the competition re-starting.

He told annual convention the future does not look bright for the staging of Minor Championship games.

“It is not known when they can resume again, but given the dramatic increase in the numbers of people contracting the virus there is no prospect of this happening in the immediate future,” he said.

Delays to the inter-county season are likely to push the start of the subsequent club schedule further out, and it is possible that the All-Ireland Club Championship semi-finals could be removed from the 2021 programme, and played early in 2022.

Several club competitions remain unfinished in Tyrone as well, with as many as 18 titles still up for grabs from the 2020 season.

Most of these are at under-age level, including the Minor Championship, in which Carrickmore are due to meet Omagh in the final.

And the issue of promotion from Division Three of the adult league is still outstanding.

Cookstown and Killeeshil are in contention to join Junior Championship winners Kildress in making the step up to Intermediate football, but have not yet been able to complete their schedule of league fixtures.

Competitions Control Committee chairman Martin Sludden has said that every opportunity will be made to complete all competitions when it safe to do so.

Meanwhile, proposed changes to the format of the All-Ireland Championship were discussed at a virtual meeting of inter-county senior football managers.

Annual Congress is due to vote on the structures at the end of February, and the input of manages is expected to be taken on board, via their county board representatives.

It’s understood the meeting reflected a general desire to see changes to the current Championship format.

Congress will look at two options for the restructuring of the All-Ireland Championship, based on a report commissioned by GAA president John Horan in May 2019, and finalised by the by the Fixtures Calendar Task Force at the end of last year.

* A league based All-Ireland series with a separate provincial championship, or

* A provincial championship structure with four groups of eight teams and the National League format remaining the same.