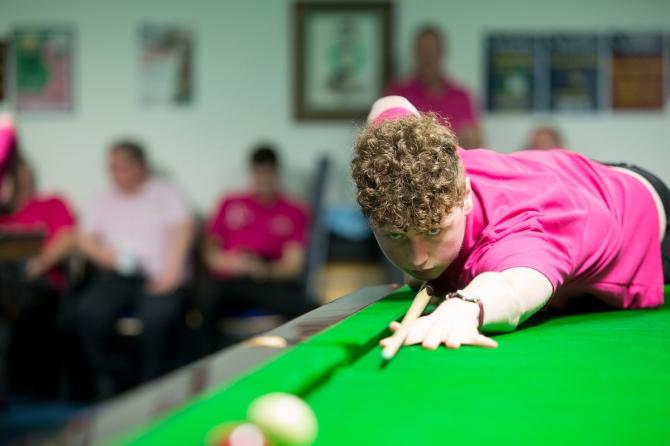 Fergal Quinn is taking on Matthew Stevens in the World Snooker Shoot Out in England on Thursday.

FERGAL Quinn has got “The Welsh Dragon” in his sights - and he’s aiming to shoot him down in 10 minutes or less!

Tyrone's rising star of the green baize will make his professional snooker debut live on television later this week when he takes on Matthew Stevens, the former world number four and two-time world runner-up.

Stevens, 43, nicknamed “The Welsh Dragon”, is also a former winner of the Benson and Hedges Masters and the UK Championship, and has claimed over £2.5million in prize money during the course of his career.

It’s certainly a tough assignment for Quinn, but the Brocagh man is still confident he can create a sporting upset when he takes on Stevens in the first round of the BetVictor Snooker Shoot Out in Milton Keynes on Thursday, live on Eurosport.

“It's nice to be thrown in at the deep end!” the 20-year-old told Courier Sport.

“I’ve got to just relish the experience. I’ve nothing to lose and everything to gain.

“Yes, there were easier draws, but at the end of the day, you still have to go out and pot the balls, no matter who you’re playing. It’s all about how I deal with the situation more than who I’m playing.

“It’s a bit of a lottery. It’s 10 minutes of snooker on a shot clock, so anything can happen.”

The Shoot Out is unique in the world of snooker.

It’s a best-of-one-frame tournament featuring 128 players in a flat draw. All matches are played over a single frame, each lasting up to 10 minutes.

The other distinguishing feature of the Shoot Out is that it’s usually played in front of a raucous crowd – a very different setting to the deathly silent arenas of professional snooker tournaments.

Of course, coronavirus restrictions mean there will be no crowd in the Marshall Arena in Milton Keynes over the course of this year’s four-day event.

And that’s something which disappoints Quinn a little.

“The tournament would be much better with a crowd,” he said.

“That’s what the Shoot Out is for – it’s for the crowd to enjoy themselves, have a few beers and have a laugh.

“People have argued that it shouldn’t be a ranking event. It’s a bit of lottery. Anyone can win it – with 10 minutes per frame, if you have seven good matches, you only need to really play well for 70 minutes of snooker and you could win a world trophy.

“So it’s completely different but in my opinion there’s definitely a space for it on the calendar and it’s something for everyone to look forward to, especially big snooker fans – it’s usually a good couple of days out for them.

“Hopefully, next year, we’ll be back to normal, and I’ll be back in it again.”

He makes the journey to England with fellow Northern Ireland players Declan Lavery and Robbie McGuigan.

“When I got the call asking did I want to accept the invitation to play, it was a no-brainer really,” said Quinn, who cites Neil Robertson as his snooker hero.

“It’s a great opportunity to showcase my skills live on TV on my professional debut.

“To be honest, I’m more looking forward to getting away out of this lockdown bubble – it’ll be a change of scenery and it’s definitley something to look forward to.”

Quinn has been trying to prepare himself for the dreaded “beep” of the shot clock by practising at home with YouTube videos of former tournaments playing in the background, and the volume turned up loud.

“But I’ve been training mainly on my time, and how long it takes me to play each shot. You have to be aware in your mind of what 15 seconds and 10 seconds feel like.”

He added: “There will be nerves, of course there will, but I’ve had some of my best performances when I’ve been virtually shaking with nerves, because it just takes your concentration to the next level.”

Quinn has been playing snooker since the age of eight when his father, who was a talented player in his youth, installed a table in their home.

“I think he wanted to relive old memories – he never thought I would get into it. But he coached me and taught me the basics and it went from there.”

Quinn, naturally, has ambitions to break into the top 64 world rankings and become a professional snooker player.

Nevertheless, he remains upbeat – and focused on his goal.

“It’s about utilizing the time that I have to the best I can,” he said.

“So I’m trying to learn new things. I’m reading books to try and train my mind and make it stronger – that’s all you can really do if there’s no competitions to develop your game, but there’s still areas to improve on.

“I’m just trying to stay as positive as possible – this won’t last forever, it’s only temporary.”