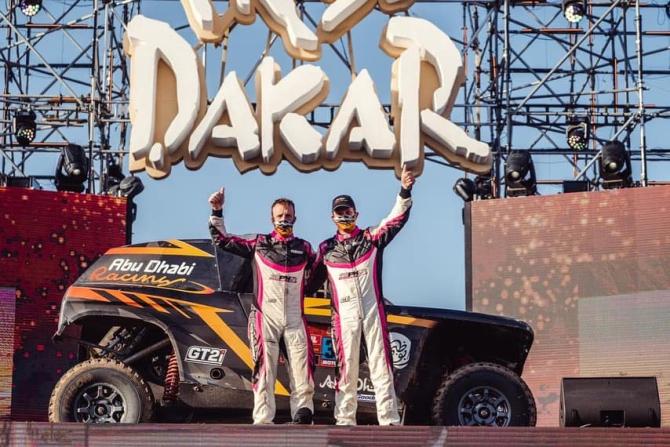 Kris Meeke and his navigator Wouter Rosegaar at the finish of the Dakar Rally in Jeddah, Saudi Arabia, last Friday.

Kris Meeke was a proud man as he crossed the finish line of the Dakar Rally in Jeddah last Friday.

The Dungannon driver enjoyed the adventure of a lifetime as he raced across the sand dunes of Saudi Arabia – but he was forced to use all his powers of resilience over the course of the gruelling 13-day event after a series of mechanical problems threatened to dump him out of the race.

However, Meeke was a man on a mission and he refused to throw in the towel.

And although he trailed the overall winner Stefane Peterhansel by more than 80 hours, Meeke finished his debut Dakar with a flourish, setting the fastest time in his lightweight class at the final stage on Friday.

Posting an image of his finisher’s medal on Facebook, Meeke wrote: “I’ve never been one for trophies or medals.

See this week's Tyrone Courier for FOUR pages of coverage.