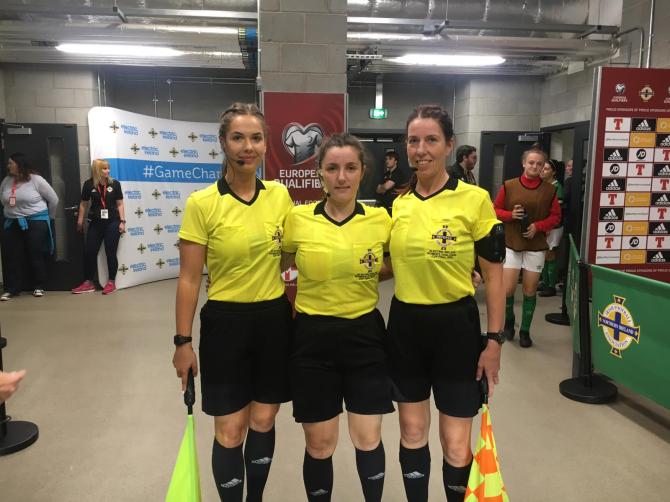 WHILE the IFA Women’s Challenge Cup final was an all Belfast affair, a Dungannon woman was absolutely crucial to the tie.

That was Lauren Trainor, who was tasked with refereeing Linfield and Glentoran in the biggest match in Northern Irish women’s football’s domestic season.

Now living in Blackwatertown, the 29-year-old, who couples her refereeing duties with working as an estate agent for Dungannon based Property Angels, had an exemplary game and made sure it was the players who were the centre of attention.

It was the biggest match so far in her refereeing career and was the first time she had refereed at Northern Ireland’s national stadium, Windsor Park.

It was also her first televised match with the game broadcast live on the BBC.

Lauren had a trouble-free evening, handing out just three yellow cards as Glentoran retained the cup thanks to a 1-0 victory.

And Lauren told the Courier it was a special night for her.

“I don’t think I ever expected I would be refereeing at the national football stadium and it would have been shown on the BBC”, she says.

“Even at the time when I realised that it was going to be on the BBC, the penny didn’t really drop with me until I saw myself on the TV.

“It was a great moment and it is something that I will always remember.”

See this week's Courier for the full interview