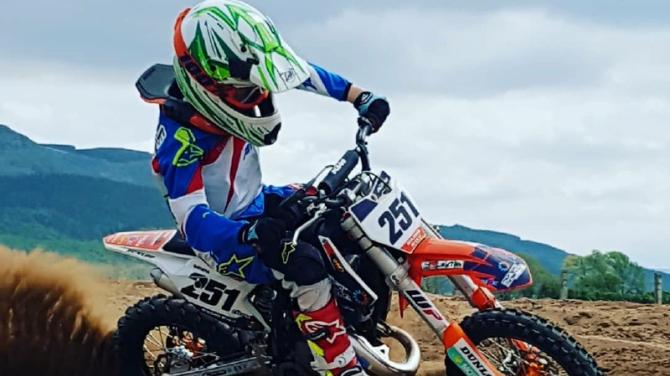 In 2017, Benjamin was talent spotted and selected to represent Northern Ireland at an International Racing Event in England in September 2017. After a gruelling two days of racing, Benjamin won the award for “Best Rider competing from Northern Ireland”, a fantastic result as he was competing with Ulster and Irish champions.

After a busy winter training, 2018 has been an exceptionally successful year for this talented eight-year-old. In January, Benjamin received a Civic Award for his contribution to Sport and has made the podium at each of his 24 race meetings.

On 21 July, Benjamin won his first Championship – The GH Racing UK Championship, closely followed a week later by the MCCNI Club Championship, winning it with one round to spare. His third title came on 25th August when he won the GR7 Ulster Championship.

Round 8 of the MCCNI Club Championship will bring the 2018 racing season to a close for this talented Cookstown boy.

Benjamin will go straight into training for the next season, although Benjamin can remain in the Auto class for another year he is currently undecided which route to take as he could also move up to the 65 class.

This quiet, unassuming lad has developed a unique style and certainly shows a lot of potential irrespective of which route he decides to take next year.

This thrilling sport clearly runs in the Neville blood as Benjamin’s brother, David (6) and sister, Anna (9), are both to be seen competing every weekend.

It would not be possible for Benjamin to race at this level without the financial help and support of his sponsors and he thanks Rainey’s Traditional Fish and Chips, Superior Flooring, Ferson Brothers, Wrights Tyres, Stanley Bell and Sons and Sinclair Hardware for their sponsorship in 2018.