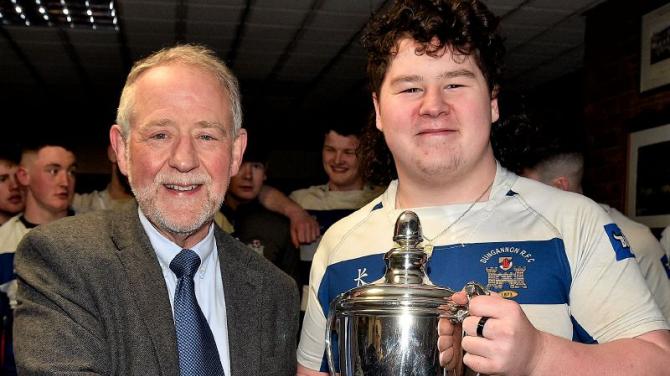 THERE was unparalleled drama and excitement in the closing stages of the Nutty Krust final at Chambers Park on Wednesday evening when the Dungannon U18s, after trailing 5-15, staged a dramatic comeback to win 19-15 in the closing minutes.

Most thought the Portadown lads had secured the TC Wells Cup when they led by 10 points with just four minutes left on the clock. Well done to skipper, Fintan Loughran and his team.

Dungannon looked the better team in the opening 10 minutes pinning Portadown inside their own half and not surprisingly inside centre, Alex Kennedy charged in on the right to give his team a 5-0 lead on 10 minutes. Dungannon kept the momentum going and should have had more tries but minor errors spoiled chances.

That said, the Steenson brothers, Jack and Ben kept the midfield of Michael Tate and Kennedy on the move with swift passing. However, good defence by Jamie Hayes, Alex Morton and Ciaran Peterson kept the visitors at bay.

Closer to the break play moved to the opposite end and the tide was turning in Portadown’s favour. Gannon was facing numerous penalties and from one simple shot Toby Gribben cut the deficit on the half hour. With Ethan Hodgen and Jamie Marshall going well in the lineout Ports dominated the remainder of the half.

Twelve minutes into the second half a long pass to Harry McCullough saw him dash in at the left hand corner. That gave the hosts a first time lead of 8-5. Dungannon then suffered a setback when their fullback was issued with a harsh yellow card. Despite good work by Jaike Callaghan and Ashley Doherty in defence Portadown ramped up the pressure and took advantage with a try per Hodgen. Gribben converted and Ports looked good at 15-5.

Then came the ‘Grandstand’ finish when two converted tries were scored in the closing minutes. Moving the ball left and right foxed the home defence and Jack Steenson stepped inside to score.

That left Dungannon just three points adrift and thoughts of a penalty strike would have made it a draw. Instead, the penalty was drilled to the corner and when Dungannon took possession a long pass went straight to the hands of fullback, Caolan Donaghy who entered the line at speed and he crashed over to the deafening cheers of the Dungannon supporters.

Following the conversion the final whistle blew and the team assembled for a rendering of the ‘Good Old Shanty’. The TC Wells Cup was presented to the Dungannon captain by Brian Irwin and Dungannon’s No 8, Ashley Doherty took the ‘Man of the Match’ award. Well done to all the players, coaches and supporters who made it such a memorable night for the Dungannon Club.