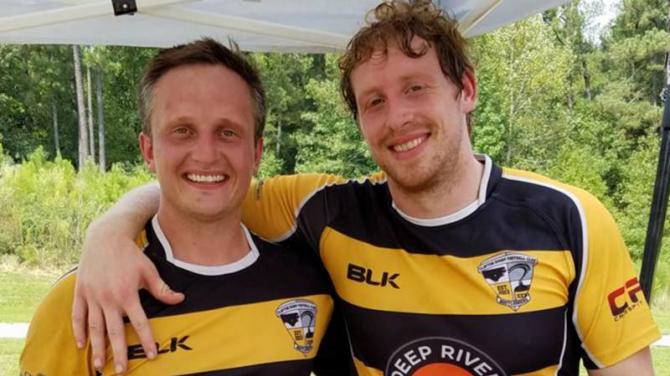 WHEN Simon Potter and Stuart McKenzie first packed down for Royal School Dungannon U12s in 1999 they probably wouldn’t have predicted they would still be playing together 21 years later.

Even less so that their home fixture would be Clayton, North Carolina, in the south eastern United States!

Both players learned the game at Dungannon Royal School and both played in the unbeaten U14 team coached by Richard Chambers in 2001.

Following a successful run in the senior school sides, both joined the Dungannon Club and McKenzie was lucky enough to get a run with Ulster Ravens in the semi-final of the B&I Cup.

North Carolina is a far cry from Stevenson Park, although both players keep in touch with the historic club and both have played in Jack Kyle Cup games during their Christmas holidays.

Clayton itself sits south of the city of Raleigh. A former tobacco town turned biotech hub, it now has a growing rugby community. Their club, Clayton, (affectionately known as “The Bootleggers”), was founded in 2013 and competes within the Carolinas Geographic Rugby Union.

The Clayton bootleggers have grown rapidly since the club’s inception. Their first tournament success came at the Blackbeard Sevens in 2016, played on the sands of the Atlantic beach.

More recent highlights have been making the playoffs for the first time in 2018 and Clayton’s first international tour to Scotland in 2019.

Incidentally, in Glasgow they played a Cartha Queens Park side, the club captain of which is also a former RSD and Dungannon player, Wayne Burrows.

While Simon and Stuart usually occupy the wing forward berths for the ‘bootleggers’, Clayton’s back row is bolstered by another man of Irish descent, the Number 8, Gareth Davies. His father hails from Dublin and used to play regularly with Bective Rangers.

Most Saturdays you’ll find these bootleggers at their main sponsor, Deep River Brewing company, the first (legal) brewery in the town.

Clayton RFC has a thriving youth rugby set-up and participates heavily in the local community. Their most recent project is the construction of a community park which would serve as their new home ground as well as a community park.

Both men moved to North Carolina in late 2014.

Simon had serendipitously met his now wife, Jordan, on Dungannon RFC’s tour to the USA in 2011.

Stuart had taken an opportunity with Almac Diagnostics to help set up their US operations.

This year, due to the Covid-19 problems, both men enjoyed Christmas in North Carolina, and not pulling on their boots for the Kyle Cup as they had done in previous years.