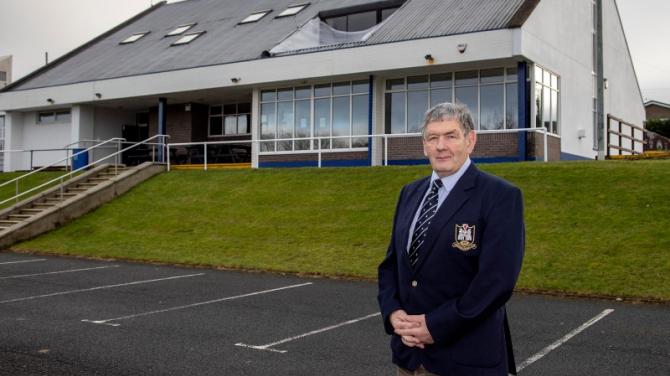 AMONG the many Boxing Day sporting fixtures which fell victim to the coronavirus restrictions was rugby’s Kyle Cup.

Played between Dungannon and Ballymena, it’s been an eagerly-anticpated date in the rugby calendar for over six decades.

Alas, the 2020 contest could not take place in its usual slot, and local rugby fans were forced to enjoy an unusual Boxing Day indoors.

The lack of on-field action did, however, provide time for reminiscing about old glories, and Dungannon president Peter Buchanan shared some lovely Kyle Cup memories in a post on Facebook.

Mr Buchanan said: “Sadly this Boxing Day, the Kyle Cup, first presented by the famous Jack Kyle himself won’t be contested for on its traditional day, but hopefully if we do get some club rugby this season, a date can be found to fit it in.

“An annual fixture for over sixty years, it has been a perennial focal point over the Christmas period for all ages in both clubs. Down the years, the match has brought in probably our biggest crowd both on the touchline and in the clubhouse afterwards, a time to meet up with old friends home for Christmas and make a few new ones both on and off the pitch.

“Club players - and indeed the big names of Dungannon and Ballymena - curtailed their Christmas Day festivities, or so they claimed, in the sure knowledge that next day their stamina and indeed their Christmas dinner would be exposed in public if they over imbibed. Some felt this was an imposition on their human rights, I reckon it was a good thing, but I do remember one or two who clearly forgot to count the wine glasses and paid the price on Boxing Day.

“Having played in a few Kyle Cups from the very early seventies up to the nineties, it certainly was a highlight in my season.

“In a fixture programme where we usually played Ballymena maybe four times a season, the Kyle Cup was the showpiece of Ulster rugby on Boxing Day and as it was the only big match being played that day, the press descended on Stevenson or Eaton Parks for something to fill their columns with - after all, rugby hacks have to be seen as well as read to earn their keep.

“As to the actual games, time fades the memory and you only recall snippets. I do remember as a youngster the thrill of competing in the lineout against none other than a certain WJ McBride, which may not always have gone to plan. I even once enjoyed a 20-minute spell, in the days of no subs, of propping against the great Sid Millar, and ever the gentleman he didn’t exactly kill me but certainly reminded me, at least in scrummaging terms, that in those days I was a mere No. 8. I was indeed very glad to see the returning prop having been patched up by Doc Hobson senior.

“Over the years many great players played on both sides, we won a few and lost a few but that doesn’t seem to matter now. But in my last Kyle Cup in Ballymena, a young Tyrone Howe played his first game for Dungannon - that career worked out quite well. Ashley Blair played a blinder but please don’t tell him. I was introduced to a baby-faced hooker called Soapy who got an impromptu coaching lesson from Willie Anderson on how to throw the ball in to myself and Willie. To us second rows, it was always the hooker’s fault if we didn’t win the lineout. But the boy did well that day and we won at a canter.

“I have many happy memories of the Kyle Cup and the festivities afterwards which seemed to go on up to New Year. I am sorry for today’s players that rugby is on hold, but I hope on restart they get the same enjoyment out of not only this fixture, but rugby as a game.