QUITE often in rugby, taking the right route can lead to success.
If you don’t believe that, just ask Exeter Chiefs’ hero, Gareth Steenson.
Last weekend, the former Dungannon player picked up a European Champions Cup winner's medal following the Chiefs' exciting 31-27 victory over a star-studded French team Racing 92.
Steenson learned his rugby at Armagh Royal School before moving on to Queen's University. Caps for Ireland U19s and U21s came his way before he joined Dungannon to play in Division I of the All Ireland League.
Gareth’s dream, like that of so many others, was a place in the Ulster/Ireland set-up. Sadly, that dream did not materialize and after two years with Dungannon he headed off for Rotherham Titans in 2006. He impressed in his first year at Clifton Lane and his talents brought him to the attention of the Cornish Pirates, whom he duly signed for in 2007.
Steenson continued to showcase his talents and among those to fall foul of his deadly right boot were the Chiefs, who moved swiftly to sign him in 2008 as they pressed their claims for a place in the Premiership.
Onwards and upwards went the Chiefs, with Steenson putting on a majestic display against Bristol in the play-offs final in 2010.
The Exeter men now moved into the top slot and when Steenson was skipper in 2017 he kicked a penalty to sink Wasps in the Championship final at Twickenham. That ensured the Chiefs’ biggest prize to date.
Given the fantastic club atmosphere in Exeter the Chiefs were hungry and prepared for more success.
It all came to fruition on Saturday when the Chiefs faced a lively and talented Racing 92. They, too, were aiming for success, having lost European Cup finals in 2016 and 2018.
The game was close with a total of eight tries shared between the sides before Exeter emerged as European champions.
Steenson was on the bench on this occasion but fit and able to play his part if the side needed him.
All in Dungannon were delighted with the result and may the Steenson family with wife, Karen, and sons, Oscar and William, enjoy the “feel good” factor for a long time to come.
Dungannon’s Canadian star, Peter Nelson, also starred on Saturday when he turned out for French side, USBPA, affectionately known as the “Violets”. By all accounts he had an excellent debut, setting up a try in a 26-20 win. Best wishes to him as he settles down on French soil. 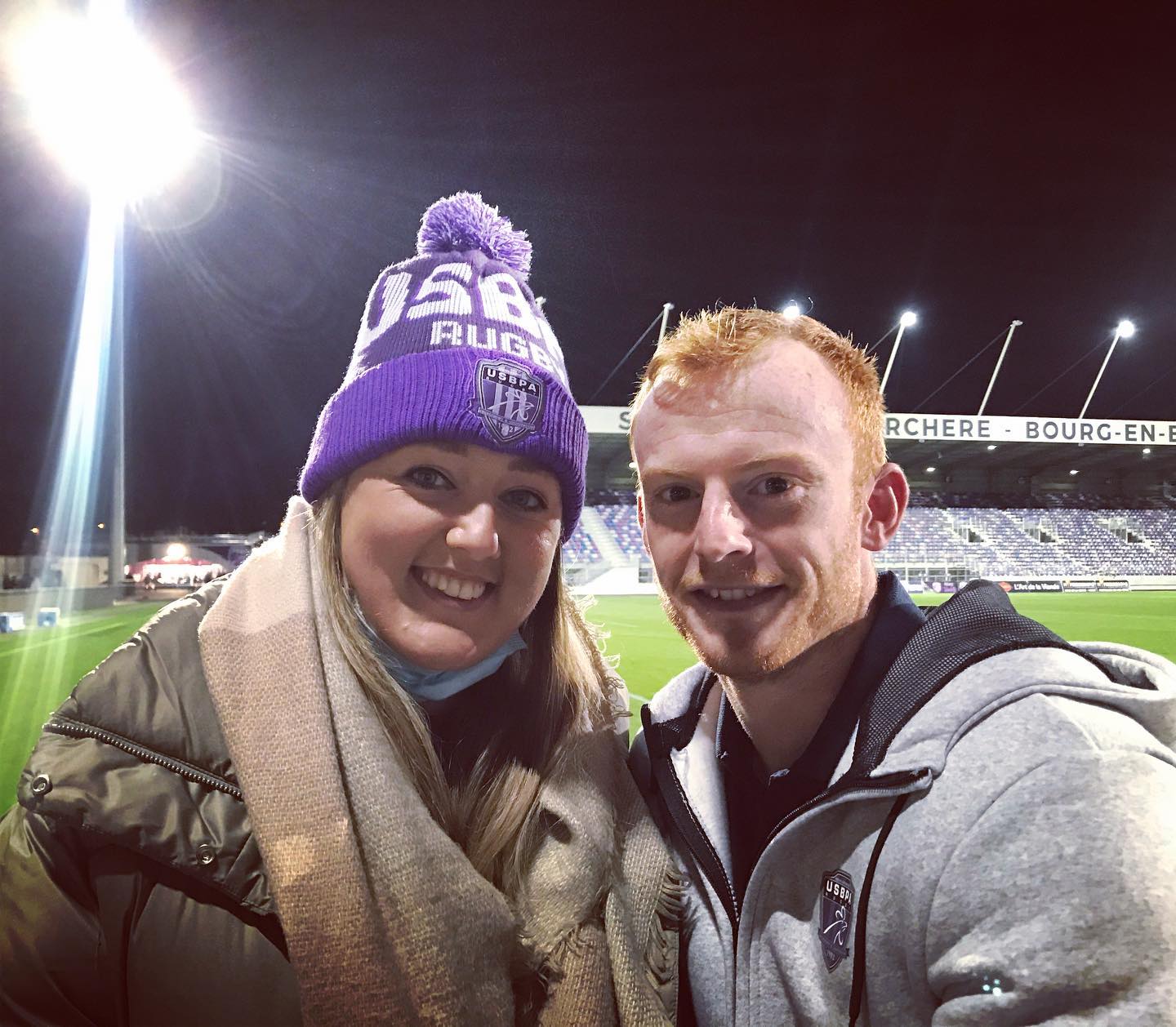 Above: Peter Nelson with girlfriend Laura after the game in France.

Congratulations to South African player Duran Krummeck who starred for the Irish 7s team at the weekend. He spent a season at Stevenson Park three years ago.