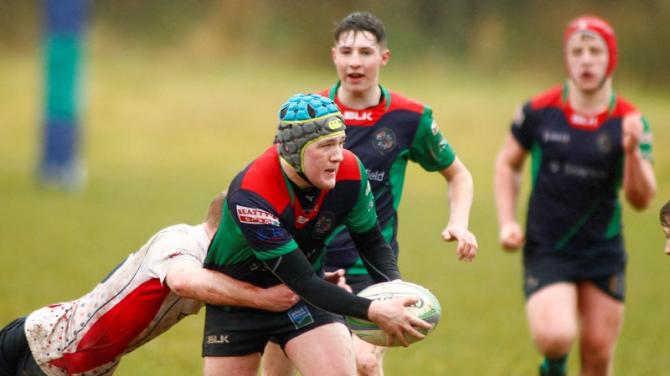 CLOGHER Valley U18s overcome a well drilled and talented Malone team with five tries in the U18 Plate.

The Valley, with home advantage, were the faster out of the blocks.

In what turned out to be miserable playing conditions, the home side were the first to score through Darryl Liggett, followed by another try from Finnbar McElroy and a conversion from Zak Kyle.

As the interval was approaching, the visitors reminded the Valley that you cannot give this Malone side an inch of space and scored out on the wing. The Valley went into the break 12-5 in the lead.

Despite the worsening conditions this Valley side reminded the spectators, why they are the talk of the West.

Sharp interplay between forwards and backs provided the space needed to make their way up the pitch.

Tommi Coulter added his name onto the try scoring list with Kyle adding the conversion. Shortly after Ronan McElroy doubled the second half try score count and the Valley led 24-5.

Malone didn’t give up and scored another try out on the wing to double their score. In the dying moments, a great individual try from Joel Busby sealed the victory and with the additional points from the boot of Finnbar McElroy, the Valley took the spoils with a 31-10 victory.

Jamie Allen picked up Player of the Match award for his work around the pitch and support play. A fantastic performance from this very talented side.

Their space awareness and handling skills in what was poor conditions, was outstanding. With players of this capability, Clogher Valley and rugby in general have a bright future.