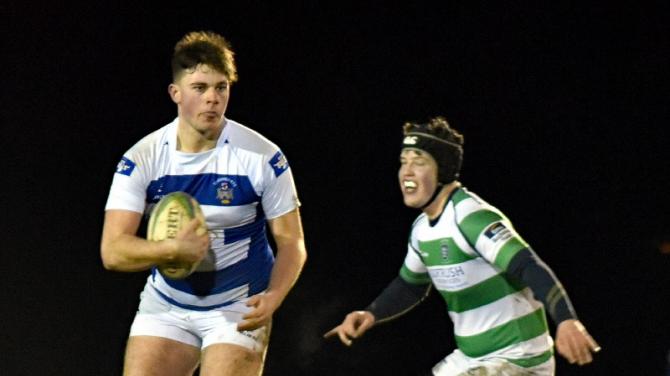 THE second of this season’s Nutty Krust U18s tournament quarter-final games took place under the floodlights at a cold but dry Chambers Park.

The Dungannon team recorded a well contested 45-8 victory with the scoreboard having read 26-8 in their favour at the break. A sizeable crowd had gathered to watch an entertaining game which featured quite a few talented players on both teams.

Among the group watching the game was Jonny Gillespie, a member of the Ulster Rugby Talent ID Department.

The Dungannon team started the game in a positive mood and opened the scoring when Isaac Multiio and Jordan Redmond combined to send Alex Kennedy in for an unconverted try to give the Dungannon team a 5-0 lead.

The Omagh team responded positively when Declan Smith made good ground before offloading to the supporting Frazer Caldwell. Frazer found Jason Lindsay running a great support line and Jason finished off with an unconverted try to draw the scores level at 5-5.

Dungnnon came back well and a grubber kick from Alex Kennedy was gathered by Joshua Clark. A couple of phases later the ball was released to Peter Nicholl who ran in for the try.

Following several minutes of determined play from Omagh, with players such as Frazer Caldwell, Oisin McBride, Jason Lindsay and Thomas Boyd all involved, Declan Smith converted a penalty opportunity to reduce the arrears to 12-8.

Following this, the remainder of the half belonged to Dungannon and they scored two tries through Matthew Willis and Alex Kennedy.

Matthew added both conversions to see the Dungannon team into a 26-8 lead at the break.

Omagh started the second half displaying commitment and determination.

They controlled the opening ten minutes with players such as Jason Lindsay, Angus Monteith and Ryan Young asking questions of the Dungannon defence.

However, the Dungannon defence, with players such as Dylan Lewis, Curtis Watt and Louis Johnston getting through a lot of work, weathered the storm and, once they had regained possession, the rest of the game belonged to them.

Liam Kelly, Ben Doran and Jordan Redmond all touched down for tries, two of which were converted by Matthew Willis, which ensured the Dungannon U18 team won the game by 45-8.

The Dungannon U18 team will next play the City of Armagh U18 team in the first of the Nutty Krust semi-final games on Tuesday 9th March.