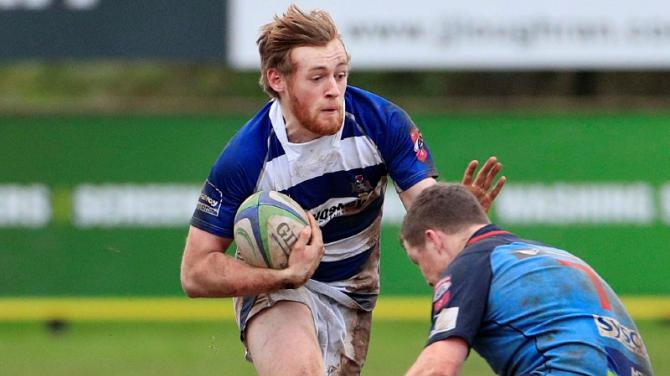 THE much anticipated Ulster derby clash between Dungannon and Belfast Harlequins proved to be a highly competitive showdown and it all ended in a draw.

Both sides were disappointed, with Quins expecting a straight win after their big margin at Deramore.

Meanwhile, Dungannon wanted a winning start to the New Year as they intend to battle clear of the relegation zone.

The big talking point at Stevenson Park on Saturday was the appearance of Peter Nelson at out-half, his first game since he represented Canada in the World Cup.

Quins also fielded a change at No 10 with New Zealander, Coby Miln not yet back from his homeland. His place was taken by Paul Kerr.

Dungannon attacked from the kick off before a penalty let Quins off the hook.

The visitors then took a clean ball at the lineout and the resultant drive set up Tom Morris for a try on five minutes. Kerr added the extras and Quins were off to a perfect start.

Dungannon retaliated and good work by the pack took play into the danger area. Matthew Montgomery was held high up at the line before the ball was returned to the pack.

When recycled, Nelson coolly chipped to the corner for Peter Cashel to score. Quins retorted and when Darryl Marshall made the hard yards the ball was flicked out to Mark Glover who sent James Bovill away on 18 minutes. Kerr added the extras but failed with a penalty shot five minutes later.

Three minutes later Jordan McIlwaine did likewise for Dungannon after Quins were pinged for a collapsed scrum.

Closer to the interval, Dungannon prepared to strike when Adam Milligan took a superb lineout. However, the whistle stopped progress and the scrum went to Quins. The half ended with the visitors leading 14-5.

Dungannon coach, Andrew Hughes had a few choice words for the team and Dungannon started the second half in overdrive.

Three minutes in it was David Leyburn who drove forward and when the ball was recycled it was moved to the blindside. Andrew McGregor took possession and a delicate chip to the corner saw Cashel dive over to complete his brace.

Five minutes later the hosts grabbed a third try after good work by the Dungannon back row. Nelson sold an outrageous ‘dummy’ before touching down at the posts.

McIlwaine added the simple conversion to put Dungannon 17-14 ahead. In the final quarter successive penalties helped Quins go forward and when they went close to the goal line the Touch Judge intervened and a rather puzzled Stephen Todd was shown a yellow card. Kerr converted the penalty to bring the sides level.

Quins tried hard to take advantage but gallant Gannon defended well and were unlucky when Nelson was short with two long range penalties in the closing minutes.

The result leaves Dungannon on 11 points with Quins now on 19. Both are propped up by bottom placed Ballina who lost two points recently for an IRFU rules infringement. Not surprisingly the issue is going to be contested.

The full list of Division 2B results from the weekend is as follows:

Well done to the Dungannon Ladies Team who won on the road on Sunday. Team captain, Cheryl McWilliams led her side to a 17-7 win over Ballynahinch with Colleen McCance and Rachel Lennox scoring unconverted tries.

Catriona Laverty was fouled as she added a third and the referee had no option but to award a penalty try.

All Ireland League action takes a break this weekend and Dungannon head for Ballymacarn to face Ballynahinch in the semi-finals of the Senior Cup. The winner then faces the winner of the Rainey OB v City of Armagh semi-final.

The ‘Latecomers’ were decisive winners of the weekly quiz organized by the Ladies Hockey Club. Noeleen Elliott thanked all those who supported the event. This week it is the turn of the Head Start Charity.