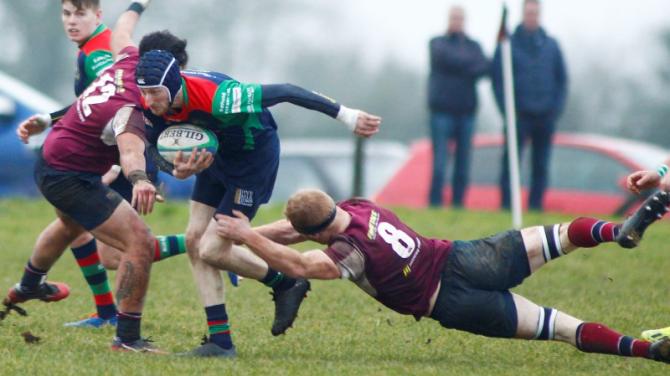 THE two teams drew in the previous encounter at Clogher Valley at the start of the season, so a tight game was expected and a repeat performance was delivered by both teams.

The Valley got off to a dream start with several phases of play, then Ewan Haire spotted a gap in the defence and chipped the ball over the Enniskillen back line.

David Sharkey burst through, collected the ball and sprinted the 15 – 20 meters to score, Paul Armstrong added the two points.

Sharkey became a thorn in Enniskillen’s side, moments later, he secured a penalty for an Enniskillen player holding on in the tackle.

Armstrong kicked the ball 45 meters down the pitch for the Valley line out.

The Enniskillen defence was caught offside at the lineout and Armstrong added the 3 points to make the score 10 – 0 to the visitors.

Two minutes later, Armstrong added to his own tally when he intercepted an Enniskillen pass and ran in from 40 meters out to score the Valley’s 2nd try. The conversion was missed.

From a lineout, Enniskillen drove forward and through a series of pick and drives, they crossed the Valley line for their first try.  The conversion was added.

Minutes later, despite a knock on in the tackle, the Enniskillen forwards crossed the line for their 2nd try.   The additional points were not added.

As the half came to a close, the Valley set up a rolling maul from a lineout.  As they drove towards the line, several attempts to pull it down were missed by the referee and he awarded a scrum to the home side.

In the dying moments of the half the Valley crossed the line to score only to have their play disallowed for alleged holding on in the tackle, a strange decision against the attacking team.

Armstrong added a further penalty to give the Valley a half time lead of 18 – 12.

With the downhill in their favour, Enniskillen came out strong keeping the Valley in their own half.  As the clock ticked by, Enniskillen were awarded a scrum 5 meters out, as they drove towards the line the Valley collapsed and the referee ran between the sticks to award a penalty try.

Enniskillen now led for the first time in the match 19 – 18.  Five minutes from the end, Armstrong added a further 3 points to the Valley with a monster 40 meter penalty kick for the lead to switch back to the Valley.  Nervous Valley supporters cheered on their side.

However a penalty to Enniskillen brought a louder cheer from the home supporters.  Finlay kicked to the corner and gave Enniskillen a 5 meter lineout.

The maul was stopped, then the pick and drive that had served Enniskillen so well, started.  Enniskillen crossed the line several times but were held up. The scrums that followed were a repeat of the pick and go and eventually the Valley ran out of defenders.

Enniskillen crossed the line to win in the last minute 24 – 21.  Enniskillen stay 3rd in the league, with the Valley in 4th but with a 6 point gap between both teams.