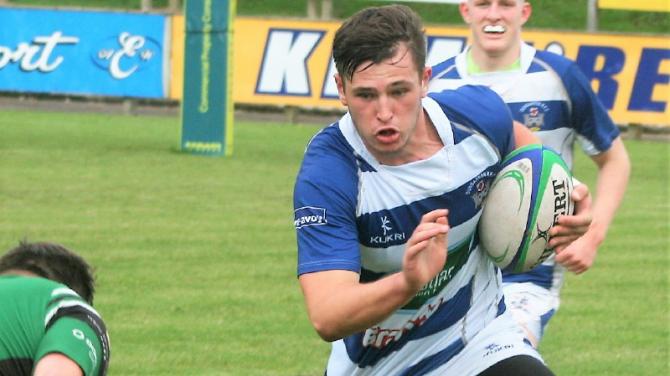 DUNGANNON brewed up a little Christmas cheer with a well deserved 40-26 win over Bangor in the Ulster League at Stevenson Park on Saturday.

The hosts led 28-12 at the break but Bangor also earned a try bonus with a remarkable fight back in the second half. The result shoots Dungannon up to second place in the table.

Dungannon were out of the traps quickly taking the game to the County Down men at every opportunity.

With the pack going well, John Russell and Adam Evans pulled the strings in the back line. Five minutes in, a concerted drive saw Sean O’Hagan force his way over.

Jordan McIlwaine added the extras and the hosts were off to a perfect start. Dungannon’s roaring start continued and when Russell darted 50 metres up the park a score was denied by a subsequent ‘knock on’.

However, the Dungannon forwards raised their game and good work by James Gamble and David Leyburn led to a try by Daniel Maxwell midway through the half.

McIlwaine’s conversion went in via a post. Five minutes later, a notable run per Jonny Toal brought ’Gannon within striking distance. Once more the forwards supported and Cameron Steenson dived over for McIlwaine to convert.

Meanwhile, Bangor were showing signs of settling and centre, Zach Kerr darted in for fellow centre Mark Widdowson to convert.

However, the Dungannon pack hit back for Maxwell to complete his brace on 36 minutes. Then, right on the half-time whistle, Bangor’s Kerr completed his brace.

The lights were switched on for the second half and within three minutes Dungannon suffered a setback, with Adam Milligan receiving a harsh yellow card.

On the hour mark Bangor also lost a player to the ‘bin’ before Russell dived over at the posts with McIlwaine adding the simple conversion.

Going into the final quarter James Gamble was ‘binned, following a thumping tackle before Bangor’s winger, Connor Scallon raced through for a converted try.

Final say though, went to super sub, Craig Gibson who finished off a fine move per the Dungannon pack. That brought the score to 40-26 and all credit to both teams for an entertaining spectacle.

A BAD start and a poor finish cost Dungannon Fourths the points at Stevenson Park on Saturday.

Tries per Jack Kennedy and Gareth McCrea and a penalty from John O’Neill pulled ’Gannon into contention before Bangor added late tries for a deserved if not slightly flattering win.

Dungannon Rugby Club said goodbye to Harrison Dudley-Rode, Dilworth tutor from Auckland, as he returned home after a one year stop.

His talents were duly recognized at Stevenson Park and that earned him promotion to the 1st XV in recent weeks.

A word of praise for the Kids and Bibs daycare who ran a very successful quiz on Thursday, 19th December .

Over £600 was raised for Evies Special Bow.

The organisers thanked all those who supported the event including quizmaster, Philip. The ‘Latecomers’ grabbed the spoils. Table quizzes now take a break until 2nd January.

Well done to Justin McIlravie and his mini coaches who organised a very entertaining Christmas party for the mini players on Friday night.