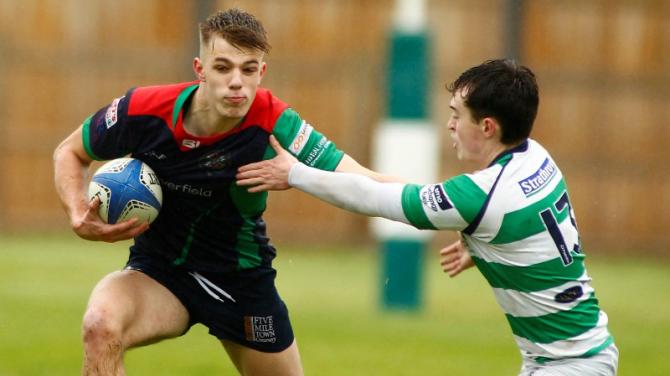 CLOGHER Valley RFC U18 took the spoils with a 36 – 0 win over local rivals Omagh.

With the rain constantly falling, the wet conditions did not make for open flowing rugby.

It took 14 minutes before the visitors opened the scoring, with a try by Finbar McElroy.

Stewart Douglas added a second try under the posts before half time, converted by Finbar McElroy. From the start of the second half, the Valley took the game by the scruff of the neck.

Forwards driving hard, then setting the backs free with some space. Joel Busby added two additional tries with a fifth coming as the game progressed.  Finbar McElroy adding four conversions and a penalty.

Despite the wet ball, the Valley backs looked comfortable with the ball in hand. Ronan McElroy and Dylan Flynn had outstanding games, with the player of the match award going to David Busby, who, even as the youngest player on the team was outstanding with his tackles and open play.

This is a team who are developing their skills and clicking as a unit.

Led in the pack by Daryl Leggitt, the forwards are creating the space for the backs to mount up the scores.

A third victory on the bounce means this is becoming a team to watch for the future.

CLOGHER Valley RFC U16 come out on top in their encounter with their local rivals Omagh.

The match played at a soaked Mellon Park Playing Fields was a tough game. From the beginning Omagh attacked the rucks and did not make it easy for the visitors.

Clogher Valley setting up each ruck as they had practiced did not make any allowance for the counter ruck.  This Omagh did with bags to spare, disrupting the flow of the Valley’s game.

At the end the inter play and determination of the visitors came through. Luke Cuthbertson opened the score for the visitors, converted by Brent Scott. Omagh replied with an unconverted score from an overthrown Valley lineout.

Scott added a second to the Valley, converting his own try, before Tommy Noble added a third try, also converted by Scott.

Ben Hamilton led from the front in the pack, carrying the ball at speed, breaking down the Omagh defensive line.

The Valley backs then spread the ball wide and despite the poor conditions pulled Omagh from one side of the pitch to another.

In the end, Valley took the spoils with a 21 – 5 victory.  Player of the match was awarded to Brent Scott for his aggressive running and a tally of 11 points.

It was a great display of running rugby, despite the poor weather.

CLOGHER Valley U14 played their nearest rivals, Omagh at Mellon Park Playing Fields on a wet Saturday morning.  The conditions dictated the play with a lot of drop balls especially during contact.

It was the Valley forwards who then took control, keeping the ball tight and driving through the heart of the Omagh defence.

The Omagh defence appeared to have no answer to the hard running of these forwards.

The Valley ran out the winners with an impressive score of 43 – 0, but Omagh kept to the task and never gave up.