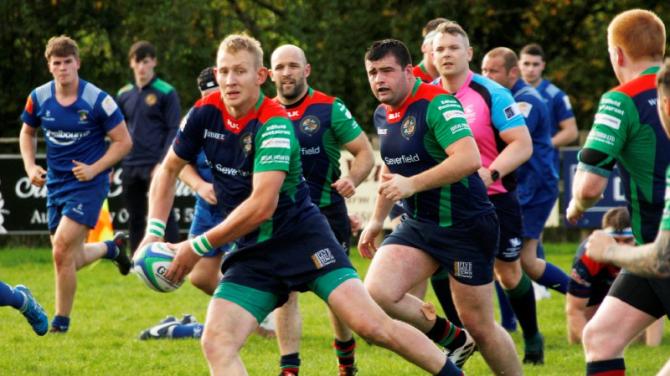 MISSING five regular backs through injury or unavailability Valley were forced into radical changes to their team for this important league fixture.

Mark McKenna, normally a second row, was drafted into the centre, (and ended up as man of the match for a towering display) Neil Cullen started at fullback and Mark Ellis moved to the wing. Valley also welcomed back James Bates at scrum-half for his first game in over 2 years.

Despite all the early misgivings from supporters the team produced an outstanding display of defence and attacking rugby to easily win the game.

Within four minutes Valley led 7-0 as ‘centre’ McKenna took a clever pass from out half Armstrong and powered under the posts. Portadown were rocked but quickly got into their stride with some excellent running rugby.

They found a resolute Valley defence that never allowed them to gain momentum. For the next 25 minutes Portadown bossed procession but could make no headway.

Valley had little ball but one breakout from their own 22 which featured the McKenna brothers interchanging passes with other forwards and backs was only just stopped by Portadown deep in their own 22.

Valley added to their lead on 32 minutes when a flowing movement from backs and forwards saw Cullen over for an unconverted try and a 12-0 lead at half time.

From the restart Valley encamped in Portadown 22 and after 44 minutes were awarded a penalty try after several Portadown transgressions in trying to stop the trademark Valley rolling mauls.

The game developed into a midfield battle with Valley winning the breakdown battles and keeping the young Portadown backs well under control.

Valley were now dominating possession and it was no surprise after 74 minutes when after several pick and goes close to the Portadown line Treanor drove over for the bonus point try. Armstrong converted and Valley led 26-0.

As the game moved into the last-minute Valley turned over a Portadown ball on halfway. The ball was moved quickly and Armstrong with a sublime reverse pass put winger Coulter, appearing inside him, away for a run in from 25 metres. With Armstrong’s conversion the final score was 33-0.

On the day a Valley result to gladden all supporters. Under coach Bothwell Valley are playing more expansive rugby seemingly able to score tries for fun when the opportunities present themselves.

However, they still maintain the defensive qualities of old. A further pleasing aspect was that Valley conceded much fewer penalties than normal throughout this game.

It was a good day for Valley with the youth sides also winning all three of their games, (U18, U16 and U14) against neighbours Enniskillen in the morning and a spirited 3rds running a strong Omagh 4ths close in the other afternoon game.