Dungannon men get the better of battling Ballymena in Senior Cup 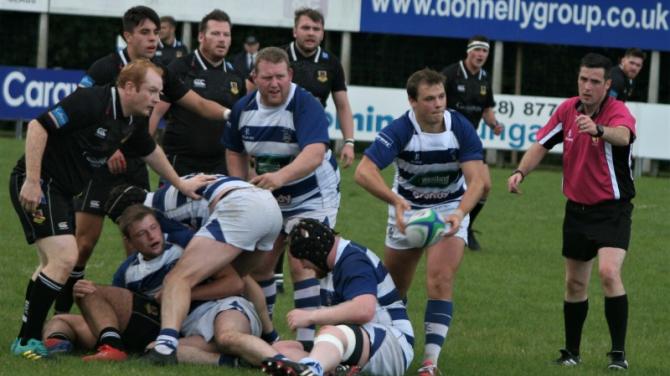 THE draw for the second round of the Senior Cup was kind allowing the ‘country cousins’, Dungannon and Ballymena to meet at Stevenson Park.

Some classy running rugby was anticipated but not before a rather strange opening quarter yielded lots of errors and referee’s whistle.

Before the break that improved and Dungannon led 15-3. The second half produced a total of seven tries and at the finish Dungannon emerged 36-31 winners with a place in the semi-final draw.

Ballymena kicked off and attacked from the first whistle. Two minutes later Michael Stronge missed a penalty shot for the visitors but Dungannon went one better on five minutes when Jordan McIlwaine hit the target.

Errors continued to spoil chances for both sides until the 15th minute when good work by the Dungannon pack saw Sean O’Hagan crash over at the posts.

McIlwaine’s conversion was a formality as the hosts went 10 points clear. Ballymena bounced back and a forward pass spoiled a chance when Glen Baillie and Patrick James combined.

On 35 minutes Stronge had better luck with a penalty but at the other end a magnificent overhead pass from Mark Faloon found Andrew McGregor who finished the move.

Errors continued to dominate at the start of the second half and a wayward Dungannon pass allowed Pierce Crowe to dart in at the posts for Stronge to convert.

Five minutes later a stray Braid pass saw McIlwaine round the defence for a try that he converted himself.

Ali Burke then broke down the left and that paved the way for a Ballymena try per winger, Dean Reynolds. Stronge converted to make it 22-17 on 50 minutes. Back came ’Gannon and an excellent drive from the forwards saw James Gamble dive over for McIlwaine to convert.

A burst down the park from the experienced Rodger McBurney saw him score a converted try and Ballymena once more closed the gap to five points. Dungannon retorted and a phase of excellent play ended with Alex Gormley touching down for McIlwaine to convert.

Ballymena hit back and Dungannon made the mistake of not playing to the whistle when a visitor appeared to knock on.

McBurney simply gathered the ball and sent Joseph Thompson away to complete the scoring. This game also doubled up as a Kyle Cup match and Dungannon were happy for some early season silverware.

The full list of Senior Cup results is as follows:

Dungannon Thirds made their presence felt at Sandel Lodge on Saturday when they defeated Coleraine Seconds 24-0.

The visitors started on the front foot with Arek Mikolacjzyk and newcomer, Cullen Dexter going close. However, it was all of 30 minutes before the first try when a quickly taken penalty saw Matthew Rodgers cross the whitewash. Dungannon then doubled the advantage when Kyle Gallagher crossed for a second and the half ended 0-10.

The same player then lit up the second half with a 60 metre break. It brought play into the Coleraine 22 where McAllister, Mullan, Anderson and Irwin kept Dungannon on the offensive for Aaron Nelson to cross on 50 minutes. Matthew Rodgers added the extras to make it 0-17.

In the final quarter Nelson completed his brace with Rodgers converting to complete the scoring. Coach, Brian Steenson and his assistant, John Gamble were very pleased.

Post match Steenson said, “Although we lost the first two games I was impressed by the players attitude and that paid dividends today especially with the return of a couple of experienced players giving the team more direction. This win and performance gives us a foundation to build on.”

This was the Fourths first game of the season and they made home advantage count with a deserved 26-21 win over Larne Seconds. The pack laid the foundation and the midfield backs showed their finishing power with tries from Alan Cummings (2), Stevie Donaghy and Clive Whylie. The latter added 3 conversions. Team manager, Thomas Givens was delighted with the result.

The Thursday quiz night still proves a useful fundraiser and last week the Ladies Rugby section made over £500. For the record the ‘Groundsmen’ edged out the previous week’s winners the ‘Fork Handles’ to take the spoils.