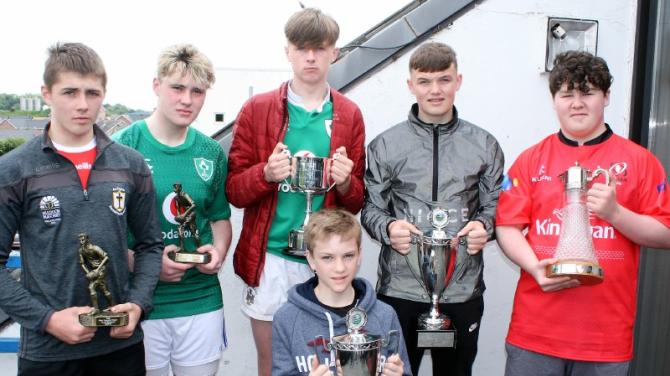 IT was an all action day at Stevenson Park on Saturday with first the U15s hosting touring side Glasgow High Kelvinside.

After lunch, Club president, Philip McCammon presided over the presentation of the Youth Awards.

A tag rugby tournament involving 12 teams occupied the remainder of the afternoon with the Clogher Valley team being presented with the Nelson Cup at the finish.

DUNGANNON 15s proved too strong for the touring Scots but most of the damage was done in the opening half as the late arriving visitors struggled to settle.

The hosts led 19-0 at the break after tries per James Girvan, Jordan Redmond and skipper, Jamie Allen.

Girvan popped over two conversions. In the second half, scrum-half Adam Scott darted in for Girvan to convert.

Allen then completed his brace before the visitors, now settled, applied pressure and Charlie Greaves crossed the line to make it 31-5.

In the closing stages Redmond added his second to complete the scoring at 36-5. The Blue Bulls certainly deserved their win but the Glasgow boys surely rued their slow start.

The Dungannon Club are grateful to their mentors, Paul Findlay, Damian Dolan and John Greaves for bringing their team on a first trip to Stevenson Park.