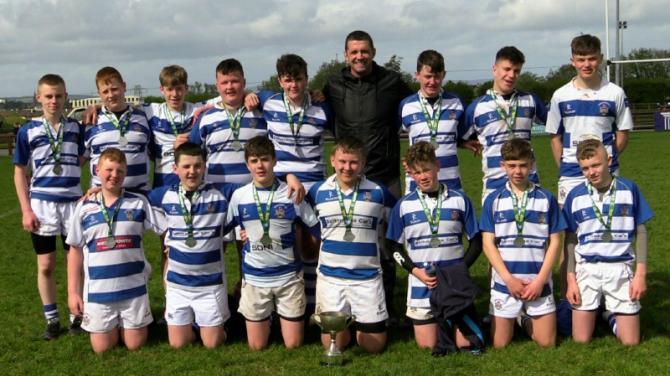 ON Saturday 27th April 2019 a select team of U13s & U14s associated with Dungannon Rugby Club travelled to Rosbrien in Limerick, the home of Old Crescent RFC to take part in the 2019 Limerick Youth Rugby Festival.

In a series of round robin matches, the U14s captained by Brooklyn Fletcher competed against their counterparts from Old Crescent, Young Munsters, Shannon, Oughterard and Enniscorthy rugby clubs.

Whilst the U14s were battling it out in their round robin heats, the U13s captained by Senan Nugent were competing hard against teams from Skerries, Suttonians, Old Crescent and Shannon.

They team went through on points accumulated to a final against a strong Shannon team that had beaten them 5-0 in the heats.

However, these young chargers were not going to be defeated twice and put in a gritty performance that eventually saw Reuben Gibson and Zak Holmes cross the tryline to win the game 10-5.

In a surprise presentation, Alan Quinlan (ex British and Irish Lions and Munster legend) presented the Shiells Cup to the captains of the Dungannon U13 and U14 teams.

The Shiells Cup has been competed for between Old Crescent and Dungannon at senior level for many years and it was great to see the traditional friendly competition between the two clubs now being carried on at youth level.