Celebration in the valley as promotion secured 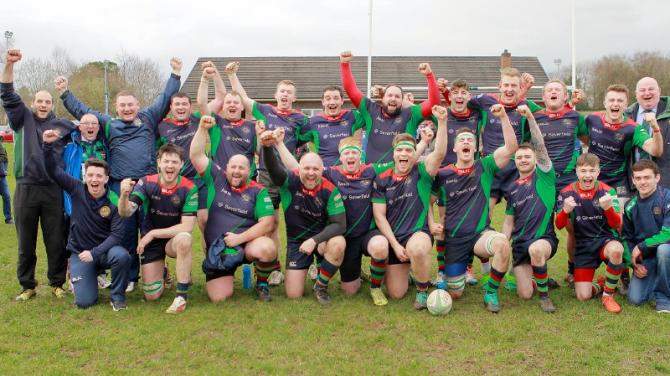 THERE was celebration in Clogher Valley as their 1st XV bounced straight back into the Kukri Ulster Rugby Championship Division 1 after one year in Division 2, with a bonus point win over league leaders Limavady.

Prior to the match, any of the top three teams, Limavady, Clogher Valley or Academy could have taken the title, depending on the other results.

The ‘big’ clash was league leaders Limavady against second-place Valley in the final game of the season.

Limavady were sitting just one point above the Valley who, playing at home, knew that a bonus point win would hand them the title.

As Limavady warmed up at the Cran, the Valley supporters were concerned, the speed and accuracy of the visitors was impressive.

Limavady who had from the very start of the season looked impressive, started the match at a breakneck speed, leaving the home side only able to absorb the pressure and hold on.

The visitors threw all they had at the Valley, but the home side held on.

The large crowd of Valley supporters knew ‘lady luck’ was on their side, when after two minutes, a Limavady penalty in front of the posts, struck the woodwork and bounced back into the field of play.

Limavady kept pressing, small grubber kicks in behind the Valley defensive line, kept the Valley in their own half.

At the 24-minute mark, the pressure told and Limavady scored an unconverted try out wide.

It was only after 32 minutes that the Valley exit their own half in open play.

A Valley scrum five meters from the Limavady try line was secured and they began inching towards the line.

The scrum splintered and the ball was picked up by Ryan Wilson who drove towards the Limavady line.

As the phases of play went into double figures, the Valley crept closer and closer to the try line with the pick and go tactic.

The referee’s arm went out to indicate a penalty for the Valley, it was the home sides opportunity and they pushed again.

It was the skipper, Michael Treanor who had his hands on the ball as he crossed the line to score for the Valley.

The try was not converted so the score remained 5 – 5. As the half was coming to an end, Limavady yet again was camped in the Valley 22.  As the Valley tried to run the ball out of their own 22, they became isolated and conceded a penalty.  Thankfully the Limavady outhalf’s kicking boots were not present and the ball sailed wide of the posts.

At the 40th minute, Limavady did cross the line for their 2nd try, when converted gave the visitors a  5 - 12 lead at half time.

Just two minutes into the second half, a 5-meter scrum to the Valley was again secured at Ryan Wilson’s feet, the scrum drove forward; as the Valley crossed the visitors line the Limavady flankers broke and tried to disrupt but to no avail.

Ryan Wilson had his hands on the ball and drove the last few feet to score.  Paul Armstrong added two points.

The score did not remain level for long.

Three minutes later the visitors were to regain the lead with a penalty from the Valley 10 meter line.  12 -15.

Half way through the 2nd half, the Valley counter rucked in their own half, stealing the ball.

Another Valley penalty was kicked into the corner.  Valley hooker, Kyle Cobain found his target, as David Sharkey rose the highest.  The maul was formed and the Valley drove towards the Limavady line.

Several times the Limavady defence splintered or disrupted the maul, but the Valley kept it close and kept driving.  At the 5-meter point, Phillip Moore saw a glimpse of the white line and drove around the side of the maul.

The poor Limavady winger didn’t know whether it was a the Clogher Valley steam train or a runaway prop which hit him, but he was driven over his own line.

Moore touched down and casually walked off the pitch, with that look on his face which says “I’ve done my bit”.

With the bonus point secured and the score 22 – 15, all the Valley had to do was to win the game.

But a 7-point lead is not a secure place, when playing title contenders Limavady.  They launched another attack, but the Valley held strong and ripped the ball in the tackle.  As the home side attacked into the Limavady half down the left side of the pitch, a high tackle was spotted by the referee and he awarded a penalty.

Paul Armstrong stepped up and slotted the penalty between the posts.  With a 10 point lead, 25 – 15, and 6 minutes to go, the Valley supporters started to believe.  They willed the team on with roars of encouragement. With the coach screaming not to give the Limavady team a penalty and an easy exit from their half, the team responded.

Armstrong kept the visitors pinned in their own 22 with clever kicks.  As the clock ticked past the 40 minutes, Limavady had to throw caution to the wind.  They started to run the ball out of their own 22.

Up stepped Rodney Bennett to break their hearts, he expertly read the game and pounced in between the two Limavady centres to intercept the pass.

He was crossing the line to touch down before his own team, never mind the Limavady team knew what was happening.  Paul Armstrong converted to leave the score 32 – 15.

With a splattering of more experienced players, this is a young Valley side who have matured under the direction of coach Stephen Bothwell as the season progressed.

With some old faithful like David Sharkey and Ryan Wilson who are playing some of their best rugby, this is a side who should be able to compete in Division 1.

The 2019/20 season will see the return of the derby clashes between the Valley and neighbours Enniskillen.