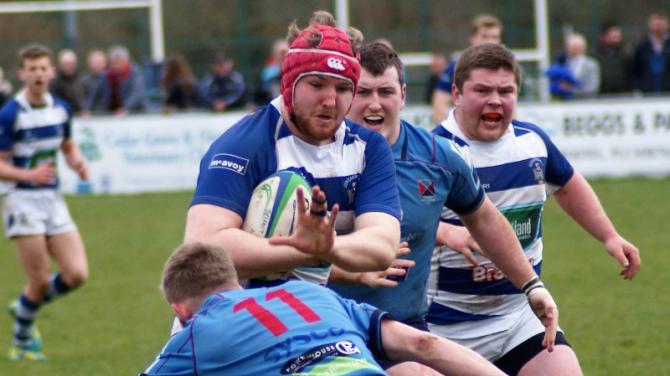 THIS was an end of season fixture that you don’t wish to contemplate, both sides at the bottom end of the table and both sides needing the points.

On the day Quins defended well and took a narrow win with Dungannon coming away with a precious bonus point.

After a bright start, Dungannon’s lineout fell apart and Harlequins took control of the first half, scoring tries via the Ballymoney Rocket, Peter Dunlop and the excellent Ben Alexander.

Turning around 10-0 down, Dungannon had a much better second half getting the better of possession and field position but nothing could overcome the failure of the usually secure lineout.

In the last quarter, Andrew McGregor drilled penalties into the corner within ten metre of the Quins line. On every occasion the ball went over the top allowing Quins to collect possession and clear their lines.

This was not a malaise of the final quarter it occurred throughout the game, whether it was the fault of the thrower, the lifters or the jumper the problem is easily resolved by good communication.

Quin’s first try was well worked, after some pressure a slick inside pass to Dunlop allowed him to nip through and score out wide on 20 minutes.

Nine minutes later, quick recycling of the ball allowed Ben Alexander to show good pace for a score wide on the left. Dungannon contributed little to warm the hearts of their supporters and did not trouble the scoreboard during the first half.

Andrew Hughes instilled a sense of purpose at halftime but although Gannon were dominant in the second period the nonperforming lineout undid all the efforts of our offensive.

An excellent move involving Lucca, Brown and McGregor saw Jordan McIlwaine race over on his opposite wing for a try after 47 minutes.

Shortly after, Dungannon thought they had a second try when John Russell moved down the blind side off a ruck, in a confined space Mervyn Brown broke the line and sent Jordan McIlwaine away to score from halfway.

Unfortunately, the ref’s whistle blew; initially it was thought for a forward pass but no, it was a penalty to Quins. For why? Dungannon couldn’t understand the ruling.

However, Dungannon got on with it and, although Lucca converted a penalty on 65 minutes, the misfiring lineout denied Gannon the vital possession to enable them to unlock a good Quins defence.

This was not good for Dungannon but other results did not go well for these two Ulster sides with bottom side Sundays Well getting a five pointer against Corinthians and Skerries also getting a handful in their defeat of Wanderers, who bagged two bonus points.

That leaves Well on bottom with Quins four points ahead and Dungannon three points up at the tail of a four team congo separated by three points with two games still to play.

Next up it is Sligo at home on Saturday, 6 April.

DUNGANNON Seconds secured a full compliment of points with a deserving win over Ballynahinch Thirds at Stevenson Park.

Team manager, Timmy Smith was delighted with the performance despite being short of a few regulars. Indeed, those who moved up to fill the gaps and those who played out of position did not let the team down and managed to win the encounter by eight tries to two.

Dungannon started brightly and first on the scoreboard was Joseph Cashel who touched down on six minutes. Lewis McCrabbe then doubled the advantage and Gannon went 10 points clear in as many minutes.

Ballynahinch were still struggling in the second quarter when the home side added two further tries. Jack Ravey darted in after good work by the forwards and Joseph Cashel completed his brace on 25 minutes. Andrew converted both to make it 24-0.

Dungannon’s bonus point try provided a wake up call for the visitors and they held more possession and attacked more from that point. The home defence was equal to the task and it took the visitors all of 25 minutes to break their duck. Ten minutes into the second half William Annett burst through for Mark Adair to convert.

Five minutes later that was cancelled out when Harrison Dudley-Rode, playing at out-half, burst through a tackle and used power and pace to reach the posts. Lee added the extras and Gannon looked comfortable at 31-7.

Going into the final quarter Jonny Toal, playing a sturdy role in midfield, decided to take the wing route racing away from two tacklers to score at the posts. Lee popped over the conversion before grabbing Dungannon’s seventh try on the 70th minute.

Ballynahinch bounced back with a converted try per Calvin Cairns but final say went to Peter Cashel who raced in for a self-converted effort right on the final whistle.

The ‘Villains’ grabbed the spoils at the Thursday night quiz organised by the Newmills play group. This week it is the turn of the Square Wheelers.

Fixtures - There are two rearranged fixtures this weekend with the 2nd XV hosting Ballyclare on Friday night, kick off 7.30pm. On Saturday the Fourths travel to play Clogher Valley. Also, on Saturday the Ladies complete their league programme with a trip to Randalstown.