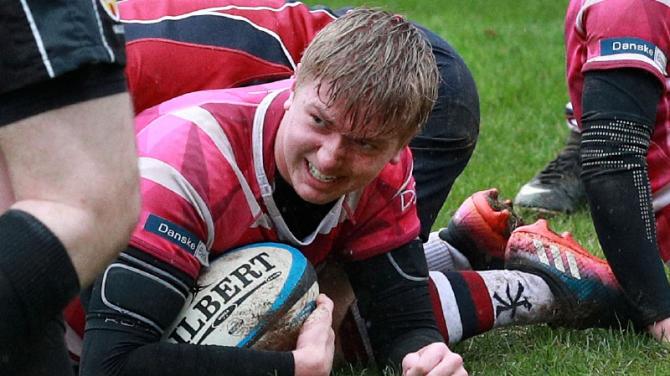 DUNGANNON Royal School are through to the 4th round of the Schools Cup following this barn storming performance at the Armstrong Field on Saturday morning.

The weather did not dampen the spirits as mums, dads and even grandparents assembled to watch their heroic offspring. RSD fielded with playmaker and skipper, Luke McMullan on the bench, as he carried an injury. The captain on the day was centre, Lewis Connolly and top marksman was Jack Girvan with a personal tally of 18 points.

Larne’s kick-off did not go the required 10 metres and RSD made good use of the set scrum when Peter Nicholl picked up to take the ball deep into the opponents half.

Conceding penalties was a problem but a well taken lineout had the home pack buzzing once more as Curtis Watt made ground following Logan McIlravie’s take.

At the try line prop, Josh Clarke was held up before the resultant scrum allowed RSD to use the blind side with Girvan diving over in the corner on 12 minutes. The conversion was missed but the start was perfect.

In a sense Larne were glad of the chance to get back to the halfway line. After the restart the Dungannon pack worked their way back inside the Larne 22, where tighthead, Adam McFarland made the hard yards for the industrious McIlravie to finish the move with a try midway through the half.