Young Valley side schooled by Academy 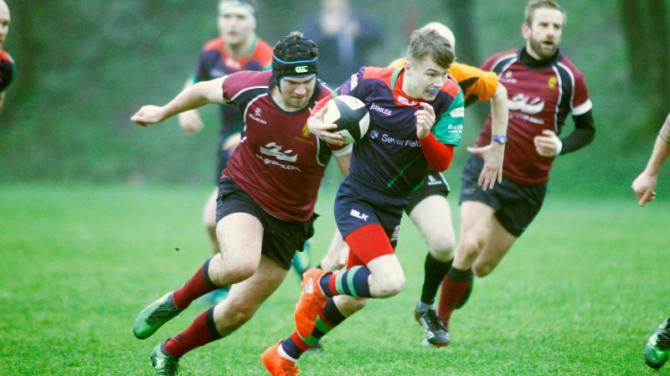 IT WAS a damp misty afternoon in Mallusk, Newtownabbey that welcomed Clogher Valley to play Academy RFC.

The Valley travelled as league leaders with the Academy sitting comfortably in the top four, with only one defeat.

The Valley, missing influential players Paul Armstrong and Rodney Bennett through injury, fielded one of the youngest back lines for the 1st XV with most of the players under 20.

Academy started the game at a blistering pace, using their deadly back line as the tool to launch their attacks.

Whilst the Valley soaked up the pressure, they gave way at each phase and Academy eventually made their way to the visitors’ 22.

A lineout close to the Valley line was secured by Academy and then the pick and drive followed, and after numerous phases, Academy crossed the line and scored their opening try. This was duly converted to give the home side a 7-0 lead.

The Valley started to throw some phases together and made their way up the pitch. A spilled ball gave the home side the chance to clear with a monstrous kick, where the ball almost disappeared into the mist.

Valley’s full back Ewen Haire read it to perfection and climbed high to snatch the ball ahead of the Academy chasers, before dancing his way through the Academy back line and gaining 30 metres.

This sparked the Valley into action and they started to compete for every ball. An over thrown lineout by the Academy, gave the Valley the platform to attack, and after numerous phases the referee awarded the visitors a penalty 30m out, but the kick that followed drifted wide.

At the half hour point, a scrum five metres out from the Valley line was struck well by the Academy hooker and the ball was held at the number 8’s feet.

The Academy then put on the drive, and after some stiff resistance by the Valley pack, they were driven over their own line. The try was not converted and the home side led 12-0.

As the half was closing, the Valley secured a lineout and set up the driving maul, as they marched up the pitch, the Academy pack, whilst dominant in the scrum could not legally stop the visitors.

After several infringements, the referee awarded another penalty. The following kick to touch was successful and the lineout was again secured.

Kyle Cobain, as all talented hookers in this move tend to do, controlled the speed and direction and then claimed the points as he crossed the line to score Valley’s try. The try was not converted.

The last kick of the half was a penalty for the home side, 25 metres out, which sailed between the uprights.  The interval gave the home side a 15-5 lead.

The secod half was an uneventful 40 minutes in terms of points, with the game being played between the 22’s. As the darkness fell and the mist became thicker, it was difficult for the spectators to determine who was who at a distance.

As with the 1st half, the final act was a penalty to the home side, which again sailed between the uprights. The Academy took the honours 18–5.

Whilst the Valley came away with no points from the encounter, they can take heart from a strong defensive display, especially from this young back line. The driving maul was the pack’s most lethal weapon in their armoury, perfectly set up and with all driving at the same time, there are few teams who will be able to legally stop it.

Next up is a home fixture against Ballymoney who are sitting middle of the league with three wins from six matches.