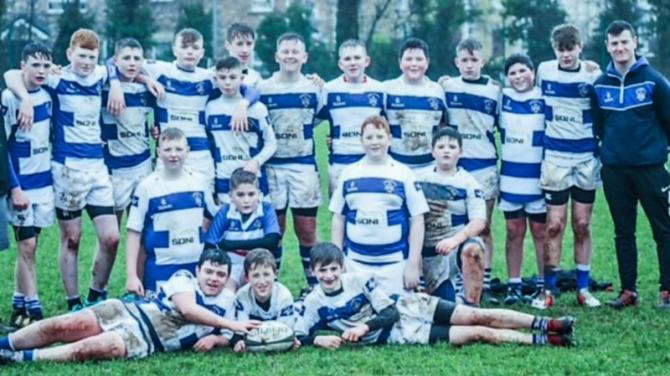 DUNGANNON, showing five changes from their last outing, made a bleak start at Merrion Road conceding a very soft try in the second minute when Wanderers prop, Diarmuid Higgins crashed over from a lineout, out half Peter Brougham converted as Wanderers eased into an early 7-0 lead.

Matters did not improve as Gannon were penalised straight in front on two occasions in the first quarter, Brougham successfully converting both penalties to make it 13-0.

Dungannon lost an opportunity after a misplaced Wanderers kick out of defence was collected by Andrew McGregor who put in a perfect kick to within five metres of the Wanderers line.

Dungannon mounted a promising attack from the set piece but were dispossessed close to the Wanderers line allowing a simple clearance to relieve the danger.

With halftime approaching Dungannon won a penalty in the Wanderers half. From fully 45 metres out and 15 metres in John Russell converted with a magnificent kick to put points on the board for Dungannon at 13-3.

The second half did not start well, with Dungannon making a mess of the restart.

Nevertheless, they showed good enterprise with a good run from Matthew Montgomery and a classic Daniel Maxwell dummy setting up good field position.

A good break out of defence by Wanderers centre Rob O’Beirne was halted by a David Leyburn tackle but unfortunately a subsequent Dungannon error resulted in yet another penalty from straight in front of the posts. Brougham converted after 50 minutes.

Dungannon responded when Andrew McGregor and Mervyn Brown broke up field into the opposition half before Dungannon lost possession and a Wanderers punt sent the ball deep into Gannon’s 22.

As the ball was moved in field to get a better angle for clearance, there was a knock on in front of the posts.

From the resultant scrum, Wanderers used the ball beautifully for left wing Eoin O’Shaughnessy to touch down in the corner on the hour. The try was unconverted as the score climbed to 21-3.

Dungannon then endured a traumatic 10 minutes, Jonah Mau’u was lost to a technical yellow card on 64 minutes, Caolan Mulgrew was arguably taken out in the air, but Wanderers were awarded a scrum for a knock on. Then from the resultant scrum Dungannon were penalised.

Wanderers took advantage of the extra man when their experienced flanker Eoghan Nihill was driven over for a try on 70 minutes. Peter Brougham converted with his fifth successful kick of six to make it 28-3

In the final minutes, Dungannon mounted another attack, with Mulgrew making ground on the left only for possession to be lost yet again.

DUNGANNON’S U14 team grabbed the spoils in this entertaining league game on Saturday.

The game between Dungannon Seconds and Grosvenor was postponed due to pitch conditions.

All Ireland League action continues this weekend when unbeaten Greystones drop in at Stevenson Park. They will start favourites but Andy Hughes young charges will be aiming for a home win.

On the road are the Fourths, who travel to play CIYMS Thirds

Rodney McKirgan, a man of many talents, was the quizmaster at the Table Tennis Club quiz won by the ‘Fork Handles’. This Thursday it is the last quiz before Christmas and proceeds will be in aid of Cancer Choices.