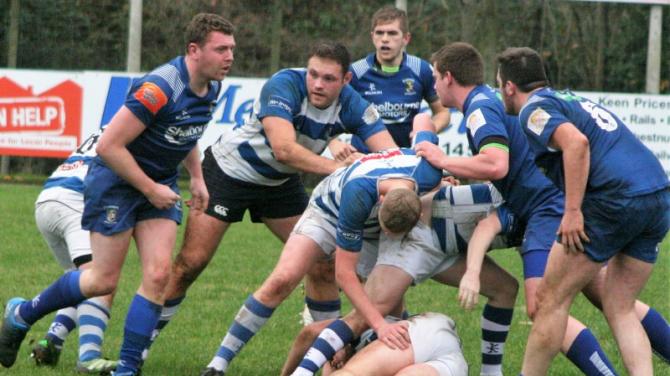 DUNGANNON Seconds started slowly at Stevenson Park on Saturday but long before the final whistle had netted 10 tries to Portadown’s one in a runaway victory.

The visitors kept possession well in the opening 10 minutes and when out-half, Conor McGarrity broke clear he was unlucky to be stopped just two metres from the line.

That said, on the 14th minute the Dungannon out-half, Connor McGeough went one better when he angled a kick to the left hand corner.

He backed himself and collected the ball to score in the corner.

Five minutes later, the ’Gannon back line was prominent once more when Peter Cashel changed his running angle before touching down at the posts. Conor Milnes added the extras and Dungannon looked to be settling well at 12-0.

Midway through the half, Andrew Lee joined the action and he cut open the Port’s defence before dotting down at the posts. Milnes converted to make it 19-0. The visitors then stemmed the tide and there was no further scoring ahead of the break.

When the second half started, the Dungannon pack took play close to the line for Stevy Donaghy to touch down on 43 minutes.

Adam Evans then spurned the tee to land the conversion per a drop goal. Two minutes later the industrious Evans finished off with a try and Dungannon were cruising at 31-0.

Portadown hit back and following a period of pressure broke their duck with a try per Danny James. It proved to be a mere consolation as Dungannon added a further three tries within six minutes.

First up it was Joe Cashel with Evans popping over the conversion. Two minutes later Caolan Mulgrew raced away for Evans to convert. Andrew Mills then crossed the line and McGeough added the extras.

At 52-5 the game was over as a contest but ’Gannon still added tries per Jordan McIlwaine and Matthew Calvert in the final quarter. Both converted their own efforts and the game ended 66-5.

Dungannon Thirds also took the spoils but without a ball being kicked. Portadown Thirds were unable to field a team.

There was a close finish in the weekly quiz when the ‘Groundsmen ‘ took the spoils following a tie break with the ‘Fork Handles’.

Paul Quinn was his usual good self as quizmaster and was the recipient of a birthday cake courtesy of the Clubhouse manager. This Thursday the NSPCC will be in charge.

There are no adult fixtures at Stevenson Park next Saturday as the Thirds and Fourths have both received byes in the Crawford and Forster Cups respectively.