What it costs to run a road race 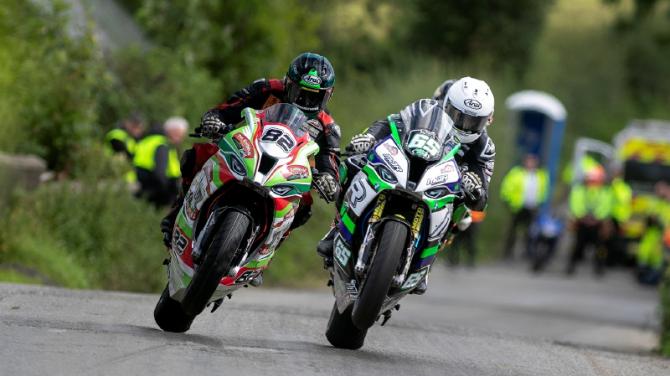 Surely it’s worth £25 to watch racing between the hedges like this, Micko Sweeney and Derek Sheils on BMW Superbikes

Despite criticism from various levels, the local Cookstown & District MCC worked hard behind the scenes to make sure the event would go ahead amidst the current Covid-19 situation.

For most road race fans, turning up on the day and watching the racing is normal.

This year, the club had a successful prepaid system in place. This allowed the club to collect money in, and it was able to maintain a cash flow to pay those bills that have to be paid before the racing even starts.

There are plenty of people, maybe even some reading this, who are against the idea of paying £25 to watch the Cookstown 100.

Well, I urge those people to read on!

Remember, last year the event did take place but a poor weather forecast resulted in a poor crowd, landing the club with a £20k deficit!

The cost of running a national championship race is very high, and road races take major planning. Most clubs elect their officers at their AGM, and it is then that they start planning for the following year.

Although most clubs have not been able to hold their AGMs due to lockdown, nevertheless, here is just a brief rundown of what happens within an organising club.

A club has to apply to the governing body, the MCUI(UC), for a permit to run, and within this permit comes your insurance at around £22k, a nice bill to start with!

Meetings are held monthly but, at race time, on a more frequent basis. The local council, who have been extremely helpful to the Cookstown 100 organisers over the years, valuable sponsors, the circuit residents, Chief Marshals etc, are all contacted to make sure they have the necessary arrangements in place.

Thankfully, we have been blessed with loyal sponsors, farmers and residents over the years in Cookstown, and this really helps.

Other items have to be finalised, like getting the public address system organised, the timekeepers, the medical teams and doctors, the race programme and printing, media, scaffolding and fencing, trophies, the race paddock, plant and equipment, and so on. All part of the unseen hard work.

A budget for the races is very important, and you have to work to the plan that you are going to have a decent day, weather-wise. Most of the expenses are paid out prior to the race day, with the exception of the prize money.

Recital bales, and plenty of them, have to be brought to the circuit from a warehouse, where rent is paid for their storage. Circuit work usually starts a month or so before the race, but the week preceding the race is when the most of the work takes place, with all the circuit prep.

Many seem to forget that after the racing is over the stripping down of the circuit begins immediately!

On race day there are over 200 volunteers, between course and flag marshals, medical personnel, paddock control, race secretarial staff, course preparation, and so on.

There is no doubt that the work that goes on behind the scenes of organising a road race sometimes goes unnoticed by most of the fans, who just turn up and spectate, bring a few beers and their lunch, and enjoy the spectacle that is pure road racing.

Maybe after reading this story, one might realise that 25 pounds is relatively cheap to watch the most exciting sport in the world.

Thanks to a team effort and a lot of very hard work, the race committee and volunteers ensure that the meeting goes ahead, but it also takes a special band of committed fans to maintain the exciting spectacle that is almost unique to Ireland, and that is pure road racing!