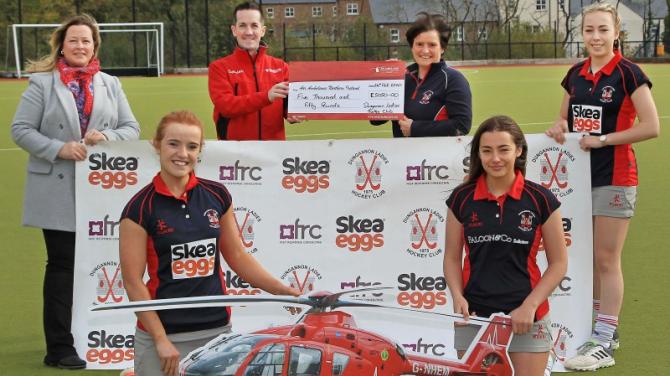 DUNGANNON Ladies Hockey Club has presented a cheque for £5,050 to Air Ambulance NI.

The money was raised as part of their PPE project during the pandemic, with a further £1,000 donated to NSPCC.

Back at the start of the Covid-19 outbreak, a technology teacher from Castlederg High School, Mrs Sara Khan, started making and distributing face visors for the health service and key workers throughout Northern Ireland.

Sara, along with her husband Maurice and their three children, Sophie, Ellie and Toby, were busy making the visors until, due to the increase in demand, they sought help from Dungannon Ladies Hockey Club, who were very happy to come on board.

Club chairperson, Noleen Elliott, her husband Trevor, along with their daughters - current club captain Jill, and first team player Karen - got involved in producing and distributing the visors along with Omagh lady, Una Doherty, and Plumbridge couple, Samantha and Derek Spratt.

All these volunteers worked tirelessly day and night to produce over 5,000 visors which were distributed to hospitals in all five Healthcare Trusts throughout Northern Ireland, including the Ambulance Service.

Visors were also supplied to numerous Private Nursing Homes, GP surgeries, both near and far, as well as key workers in private businesses.

These visors were vital as PPE was in short supply and everyone was very appreciative of the product. Several schools and local businesses donated supplies to enable this work to continue.

The hockey club also purchased material and supplies for the hard-working volunteers who were making scrubs for all healthcare workers. Several club members were involved in the production of these scrubs which were also in great demand.

The club also supplied gloves, gowns and other PPE products to Private Nursing Homes in the area who were finding it extremely difficult to procure such items.

The hockey club then set up a “GoFundMe” page for donations which allowed them to continue to source materials. After expenses, they were left with a considerable amount of money which was to be distributed to charitable organisations.

Dungannon Ladies Hockey Club and Castlederg High School then agreed to donate the sum of £5,050 to the Air Ambulance who provides a very vital service, particularly to the rural community.