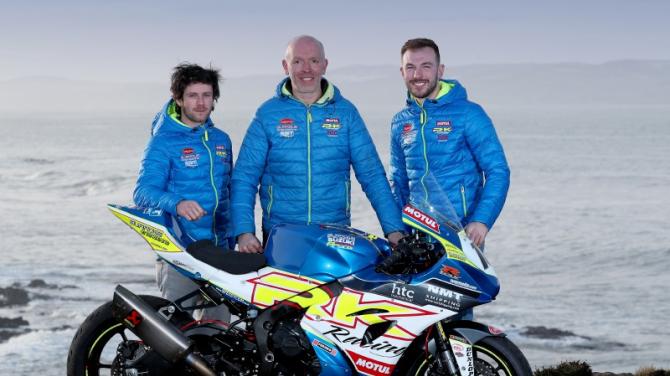 Speaking to the Tyrone Courier, the local businessman said: “First and foremost, this has probably been the hardest year to date since I started running a team to actually put together a line-up.

“It has been especially difficult because of the limited number of riders available but I have a duty to sponsors to have the most competitive team possible out on track, I feel with Paul Jordan coming in to spearhead the team alongside Mike Browne, we have a strong combination for national road racing.

UGP winner Paul Jordan has established himself as one of road racing’s brightest prospects over the past few seasons and although the former British Championship 125cc race winner only made his Isle of Man TT debut in 2017, Jordan finished an excellent fourth last year in the Lightweight race.

He later claimed his first international road racing success at the Ulster Grand Prix in the Supertwin class and in 2018, Jordan has also lapped the Dundrod course at 131.148mph, Paul will concentrate solely on the Irish national meetings for John Burrows’ Co. Tyrone-based team this year.

Jordan joins rising talent Mike Browne in the line-up, who will compete at the North West 200 and Isle of Man TT in addition to the Irish national meetings.

“Paul will spearhead the team alongside Mike Browne, we have a strong combination for national road racing,” said Team Principal John Burrows.

“Unfortunately, when he left RC Express Racing, Paul had finalised other commitments for the international races by the time myself and Derek Sheils parted company.”

He continued: "I had to make a decision and we came to a deal with Paul to run him at the Irish nationals. I’m excited about the season ahead because it is a completely new line-up for Irish road racing.

“I, and the team will give both lads 100 per-cent support. Paul is an experienced 600cc rider and Mike has proven his worth in the Supersport class last year, so I don’t think they will be far away from the front in the 600cc class.

“I feel they have the talent to do a good job but when it comes to the 1000cc class, I certainly don’t expect Paul to be winning races straight away.

“This new challenge excites me and I hope both riders can progress their careers with the team in the big bike class.

“Charlotte Richardson from RK Racing is passionate about bringing along new talent and by having Mike on board, we are fulfilling that criteria and I’m looking forward to seeing what the season brings.”

Paul Jordan spoke of his excitement to be joining a team with such experienced leadership.

“It’s fantastic to be joining a team like Burrows Engineering/RK Racing because John has so much experience and I know this is a move that will really benefit me,” he said.

“It will be nice to work with Mike Browne as well because he’s been coming through the field strongly. You only have to look at the calibre of riders who have been with this team in the past, like Dan Kneen, Malachi Mitchell-Thomas, Davey Todd and of course Derek Sheils.

“The team is local to me and I only live about 15 minutes away from John’s house, so that is going to prove useful as well.

“I’ve never raced a 1000cc Suzuki before and I only sat on one for the first time when we did the team photoshoot.

The plan is to ride the bike for the first time at Kirkistown in a test at the end of March.“

RK racing's Charlotte Richardson said: “Everything is taking shape now – John has the bikes looking great as always and Mike and Paul are looking forward to getting on them. I can’t wait for testing and the upcoming season.”

Newmills rider, Stephen McAdoo took time out from his 2020 race preparations to take part in the Production class in the rejuvenated Supermoto scene.

Going into the final round on Sunday, Stephen had a 50 point advantage, but in race one, crashed out whilst leading!

The gritty competitor remounted, recovering from last to finish fourth, before going on to win the next two races, and with it the 2020 Production Supermoto Winter series Championship.

Stephen will again take part in the Ulster superbike championship on board his Connolly Kawasaki.

Enlightened Promotions are running a Pit Bike track day this Sunday at Nutts Corner, Practice will start at 10.00am, and run until 4.30pm.

Cancelled last Saturday due to the weather, the MCUI Training school will begin this Saturday at Bishopscourt. ALL Newcomers are asked to attend.

All members are asked to attend.