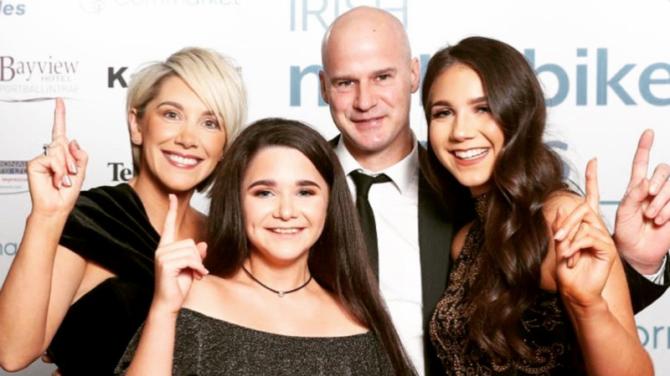 LAST FRIDAY was a day Killyman rider, Ryan Farquhar will never forget as he added another major achievement to his glittering accolade of victories, when he was inducted into the Irish Motorcycling Hall of Fame.

This was just another reward for the local rider who has amassed a total of 357 road race wins but one he knew absolutely nothing about.

“I am well chuffed to be honest I knew nothing about it,” the Hall of Famer told the Courier. “Karen (Ryan’s wife) knew, they told her about it but I was kept in the dark and only found out on the night. It was a complete shock.

“I have been going to the award's night since its inception in 2003.

“I have done some work with Cameron Dawson and my team, KWR Racing, was nominated for two awards. We went down to the show as a team hoping to win something but never in my wildest dreams did I think this was going to happen, I am honoured to say they least.

“To see my name alongside the greats of Irish Road Racing including Joey Dunlop and Raymond McCullough, is something I never expected, I am all chuffed to be honest.”

Little did he know, that when he started racing in a 350 Yamaha, loaned to him by his Grandad, Alan Ferguson, in 1993 that he would one day be considered among the greats.

Farquhar started his career competing in the now defunct Enkalon Clubmans series, finishing second in the championship in his first year of racing, despite a spill, at Bishopscourt, which resulted in a broken arm.

Some 25 years on, Farquhar has amassed 357 road race wins and can count multiple TT, NW and UGP wins, holder of many race and lap records, seven times winner of the Duke Road Race Ranking championships and the knowledge that he has the most wins at the local Cookstown 100 amongst his many accolades.

“My uncle, Trevor Ferguson started racing when I was five,” said Farquhar. “From then, it was almost a weekly thing. I would have been going to races along with my uncle and grandfather, so it has been something I always wanted to do.

”I didn't really compete in road races until 1995. That year I was fourth in the Championship, I won a few races that year, then got my next break on a very competitive 250 Honda.

“In 1997 I finished third at the Ulster Grand Prix and that really kick-started my career and launched me into bigger things.

“I rode for McAdoo Racing from 1999 on and that was the start of me racing four stroke and things just went from there.”

Farquhar was given the original Geoff Duke Trophy in 2010, after winning the title three years in a row. Geoff always said that if a rider won the championship hat-trick, he would retain the trophy for ‘keeps’, the promise was honoured by Geoff’s son Peter.

These days, Ryan can be found at Trials, where he continues to be competitive, with many wins, Farquhar is also a renowned Clay Pigeon shooter, with many awards to his name

Following his Uncle Trevor’s death at the Manx Grand Prix in 2012 Ryan quit the sport, but as has been the case in the past, the lure and addiction to road racing proved too much.

”In 2006 I broke my neck, smashed my femur and did damage to my upper arm, it took me well over a year to recover from that.

“Following my decision to come back to the sport in 2014 a few people slagged me off for doing so but it is my passion.”

He was back in the saddle again, only to suffer a horrifying spill at the NW200 in 2016, which resulted in life-threatening injuries. Thankfully, after a rather prolonged recovery, Ryan is back in action, but this time, in trials bikes.

Farquhar also continues to run his own successful race team, KMR Racing, with many top riders having graced these bikes.

He joins a host of legendary names in the Hall of Fame, including Joey and Robert Dunlop, William Dunlop, Eddie Laycock, Johnny Rea, Phillip McCallen, Brian Reid and Steven Cull.

Speaking at the ceremony, Farquhar said: “I’ve had a fantastic career and I’m still here to tell the tale, whereas there were a lot of other fantastic road racers who had great careers, but never got the opportunity to sit back and look at what they achieved over their racing lives. From that point of view, I’m very lucky.

“You can count on one hand the number of top riders who are here today to be able to look back on their achievements, riders like Phillip McCallen, Adrian Archibald, Brian Reid, Ray McCullough and the likes of Steven Cull – there are very few.

“I’m very thankful because I was very close to becoming one of those riders who had that chance taken away from them.”

“There are far to many names to list to thank – I just want them all to know how indebted I am to them and to thank my wife Karen, she really has been my rock throughout my career.”

The Killyman man is no doubt, proud of his achievements and says he wouldn’t swap his career for anything.

Cameron Dawson, Jamie Lyons and Andrew Smyth were all in the running for young rider of the year, but the winner was Scott Swann.

John Burrows was on hand to collect the Greenlight TV award for King of the Roads for Derek Sheils, whilst Jonathon Rea was the winner for the 7th time!, Just one short of Joey Dunlop.