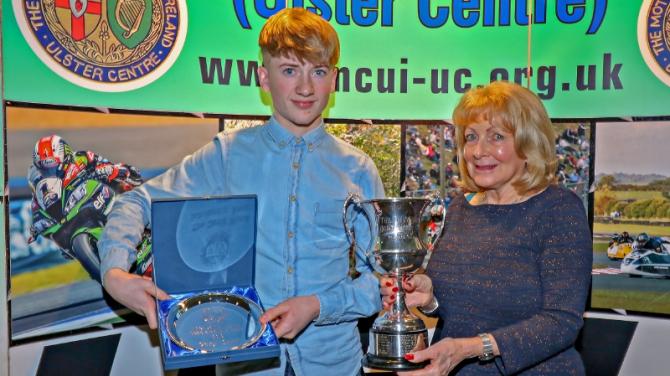 CASTLEDAWSON teenager Gary Scott was bestowed the honour of The David Wood Scholarship at the annual MCUI (UC) 2019 Awards held at La Mon Hotel on Friday past.

Scott, a third generation racer, was destined to earn his stripes in the motorcycling circles of Ireland.

Gary grew up watching and supporting Dad Ronnie and Grandfather George in action on both the circuits and roads’ so it came as no surprise that he followed suit.

Following a very successful ‘rookie’ season (2018) in which Gary secured runner-up in the newly formed Irish Minibike Championship BMW Autoparts Junior Gearbox 140cc Class it was time to take his honed race-craft, natural ability and drive to succeed to the Short Circuits.

During his season he took the top step at no less than 4 x Moto3 USBK races and secured the Ulster Championship.

Gary’s family also managed to raise the funds for a trip to Donington to compete in the 11th Round of The BSB 2019 HEL Performance British Motorstar Championship gathering up invaluable experience, knowledge and a taste of what 2020 will hopefully comprise.

Added to the success of his 2019 Short Circuit campaign Gary also found the time to lend his support to The Irish Minibike Championship.

A popular character within the paddock Gary graduated from the Junior to the Senior Class of The AJM Car Sales Sponsored Senior Open with great success.

Securing third in the 2019 Championship and second in the 2019 Snowflake Showdown on board his Honda CRF 150cc machine Gary demonstrated confidence and speed that rivalled much more experienced competitors.

2020 will see Gary compete in the newly revised format of the British Talent Cup and the Scholarship will go along way to aid his campaign.

He introduced and secured some of the biggest sponsorship deals for Ireland’s Motorcycle Sport Governing body of Road Racing – the MCUI (UC): Motor Cycle Union of Ireland (Ulster Centre).

Lucrative deals included big names such as Embassy, Superkings and Lambert & Butler. He was the chairman of the Motorcycle Road Racing Club of Ireland for many years and was a relentless ambassador for the sport.

Wood passed away in 2004 and in his memory the Motorcycle Road Racing Club set up the annual award of The David Wood Scholarship to the most promising rider.

The winner of the 2019 Junior Isle of Man TT, Lee Johnston was the first winner of the Scholarship in 2005 and other notable winners include Kia McGreevy, Richard Kerr, Jamie Lyons, Eugene McManus and Scott Swann.