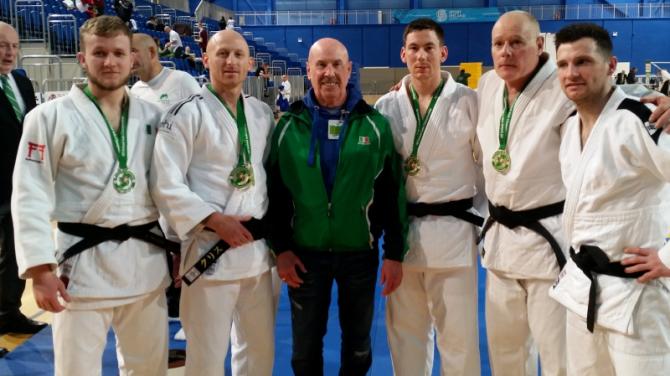 The All Ireland Judo Championships were held in the National Indoor Arena at Sport Ireland HQ and hundreds of competitors from all ages descended on the capital for the last event of 2019.

The club had six seniors and four juniors taking part.

In the morning session, eight year old Sofija Proceviskis won all of her four fights at 28 kilos inside the distance to claim the first national title of the day and she was followed shortly after by 13-year-old Ceallach Quinn who won a bronze medal in the girls 66 kilos.

Matt Barrett didn’t make his weight category of 27 kilos and had to move up to 30 kilos. Matt fought his heart out but, like his team mate Anrejs Proceviskis in the 38 kilos, he didn’t make the podium.

In the afternoon it was the turn of the seniors and the ‘veterans’ (over 30 years).

Ben Taylor was first up at 66 kilos in the under 20 years and won his first fight well. His next opponent, Black belt Peter Cassidy from Belfast, was the favourite for the title but Ben caught him with a beautiful throw.

However, it was not enough to finish the contest and in the ensuing struggle on the ground Cassidy managed to get a strangle on Ben and before Ben had a chance to submit he was unconscious.

He came round a couple minutes later after medical attention but under the rules of judo if you are strangled out you are not allowed to compete any more that day for safety reasons.

Kris Kavanagh, Brian McGilloway and Daniel Grimley were entered in both the seniors and the veterans.

Kris had no trouble winning the senior event at 60 kilos against his younger adversaries but the 38-year-old had a tougher time in the veterans and in the final against Danny Roche from Kerry, Kris had to pull out all the stops to claim his second gold medal.

Paul McConville won back the veterans title he last won in 2012 and, at age 54, Paul, who is a fifth Dan Black belt showed that age is no barrier.

Brian McGilloway at 81 kilos won bronze in the veterans before the 30-year-old did battle in the seniors.

This was a fiercely competitive category and, after losing to the eventual winner earlier, Brian had to come back in the repechage and beat two opponents to win another bronze medal.

Cathal McNabb didn’t make his 81 kilos weight and moved up to 90 kilos but the 24-year-old was in terrific form and made it through to the final where he lost to experienced fighter JT Deenihan from Kerry, but Cathal was more than delighted with the silver medal.

Daniel Grimley, who a few weeks ago won the Irish Open veterans, fought in both the seniors and veterans but was unlucky in the draw that in both categories saw him matched up with the pre-tournament favourites.

Daniel gave his usual fighting performance, winning fights in both categories, but on this occasion he had to come home without a medal.

Medal tally and All Ireland champions for 2019: