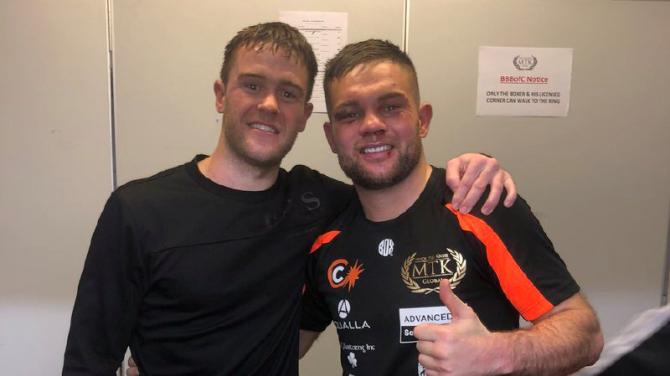 COALISLAND boxer Conrad Cummings failed in his quest to bring the WBO European middleweight title back to the town on Saturday night.

Cummings never took a backward step against Essex southpaw Danny Dignum at the York Hall in London but Dignum edged the opening stages, catching Cummings with some strong body shots.

The Englishman was the more offensive fighter in the first round, catching his opponent on the nose with an uppercut before Cummings was deducted a point in the second round for several uses of the elbow.

Cummings grew into the bout, although a further warning followed.

The 28-year-old forced the fight against his rangy opponent, enjoying some success in the fourth, but couldn't find the target with sufficient force often enough as Dignum used the ring well and boxed on the counter. The pair clashed heads which cut the 28-year-old above his right eye.

Dignum came out firing in the fifth round, and caught Cummings with a bodyshot before landing a powerful blow to the head of Cummings and although he bravely stayed on his feet, he was visibly hurt and referee Howard John Foster jumped in swiftly to call a halt.

This was Conrad 'Dynamite' Cummings' fourth time fighting for the WBO European belt; he had won it twice.

But Dignum, 27-year-old, standing 6ft 1ins, managed to avoid the Tyrone lad's big guns before going on the offensive in round five, stepping in with a series of body shots, straight rights and left hooks.

Speaking after the fight, Dignum said: “Conrad was a true gentleman leading up to this fight, and he is a good fighter. I hope he is okay.”

“I was in there with a hard opponent, so I upped my training by about 50 per cent for this fight. I did my diet and training properly, and everything else.

“The hard work paid off.”

“Well done Danny, you are a class act in and out of the ring,” said the Coalisland fighter.

“I wish you all the luck in the world for the future, champ!”