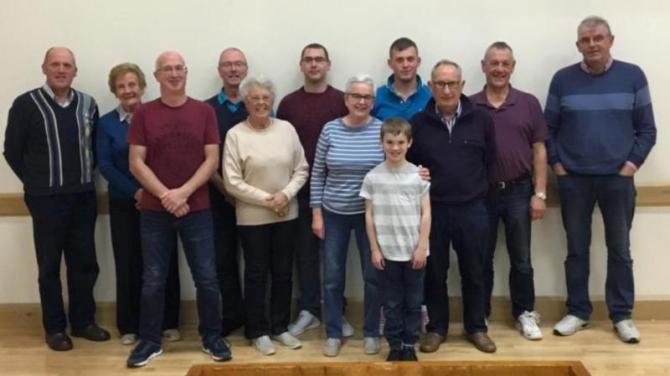 A FRIENDLY match was played on Wednesday 9th October in Newmills Presbyterian Hall between their Bowling Club and Benburb Bowling Club.

This was a 50th Anniversary celebration match to commemorate the formation of Newmills Bowling Club.

It was played in a friendly atmosphere with the score of no relevance and a great night of fellowship was had by all. The highlight of the night was the supper provided by the host club.

Fifty years ago on Tuesday 30th September 1969 around 30 prospective bowlers met in Newmills Orange Hall to investigate the possibility of starting a Bowling Club.

The Rev. W Fenton chaired the meeting and oversaw the election of officers. It was then suggested by Mr J Anderson a group of prospective bowlers travel to the Benburb the following week on Tuesday 7th October to play along with the local club and see how the game is played.

On Tuesday 14th they travelled to Donaghendry for further instruction after which it was decided to go ahead and purchase mats and bowls.

Mr J Watters (Hon. Treasurer) priced the equipment with Mr S Trotter at £102 for 1 mat and 16 bowls. It was the proposed by Mr J Anderson and seconded by Mr W Reid that two mats should be purchased.

The Club the played their bowls in Newmills Orange Hall until September 1983 when they moved to the Presbyterian Church Hall for the 1983/84 season where they still play.