Bell the toast of Tullyroan 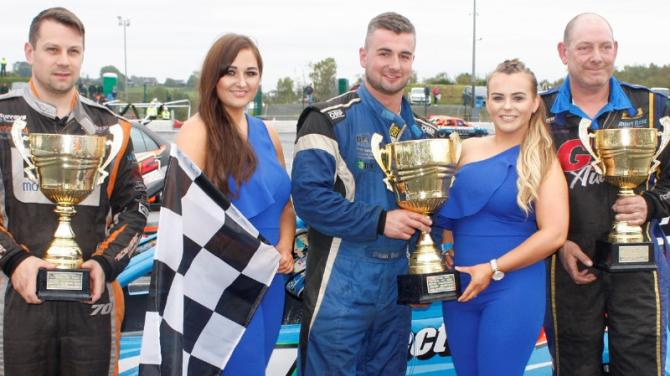 In front of a packed house, Bell raced home to the National Hot Rods British title after a superb race, whilst arguably the drive of the weekend went to Davison as he charged through a star studded international field to land the Superstox British title from towards the back of the grid.

All four corners of the British Isles were represented in the DRS Steelbuildings National Hot Rods British Championship, with Broughshane’s Jaimie McCurdy grabbing the first heat win as he just held off Derek Martin at the flag.

Heat two saw a fantastic victory for former British Champion John Christie, as he roared around long time leader Keith Martin on the wide outside line for a superb victory that had the crowd on their feet.

The final heat saw Ahoghill’s Shane Murray in victory lane, as he steered his Ginetta home ahead of World Champion Robert McDonald from Scotland.

The opening exchanges in the British title race were simply breathtaking, as pole man Christie and Glenn Bell drove side by side for some time, with Murray right in the mix too as all three chased the lead.

Bell finally broke clear as Scotsman Gordon Alexander joined the fun at the front. Glenn duly completed the remainder of the race to take the British Championship crown, with Murray and Alexander completing the top three at the end of a race that will live long in the memory.

The reverse grid British Revenge Race ended in controversial fashion with on the road winner Adam Maxwell disqualified for contact which took long time leader Derek Martin out of contention. That handed the win to Murray over McDonald and Bell.

The meeting finale was for the superb Leslie Dallas Memorial Trophy, which saw Murray romp to victory over McDonald and Bell to complete a great weekend for the National Hot Rods.

Heat two saw English Champion Nick Roots get the best of a great fight to take the win over Green and Stephen.

On Sunday, the Irish Open Championship was up for grabs, with the heats falling to Stephen and Kyle Beattie. The second one was an especially good encounter, with Beattie coming back from what looked like an impossible position to take the win.

The Irish Open Final saw Stephen the first to show with Green and Davison right on his case. Davison departed the scene when his wheel guard broke loose, with Green then bursting through to land the Irish Open title with an immaculate drive to the flag.

The Escorts and Anglias of yesteryear entertained as a large field of visitors turned up for the Classic Hot Rods action. DMC promoter Davy McCall was the star of the show on his own circuit, taking victory in both the Irish Open Championship and the Jim Purdie Memorial Trophy.

Sunday saw McCall take the opener after a super drive from the rear of the field, whilst Scotland’s Jock Campbell took the heat two win by the narrowest of Margins. The Jim Purdie Memorial Trophy is always an emotional affair and it was McCall who took the win over Taber and Campbell.

Top of the support racing was the coveted Keir Millar Memorial Trophy for the young stars in the Ninja Karts.

Antrim’s Leyton Hughes was on fire in the heats, winning the first ahead of Cumbria’s Toby Tyson and repeating the feat in heat two ahead of Oxfordshire’s Finley Kew.

Stock Rods and Lightning Rods were also in action over the weekend, with Glenavy’s Dan Shannon landing the Tullyroan Challenge Cup for the Stock Rods after a somewhat bruising encounter on Saturday evening. Shane McMillan and Curtis Greer completed the placemen, whilst in the Lightning Rods Richard Stewart took a clear win over Jordan Rochford and Nigel Jackson.