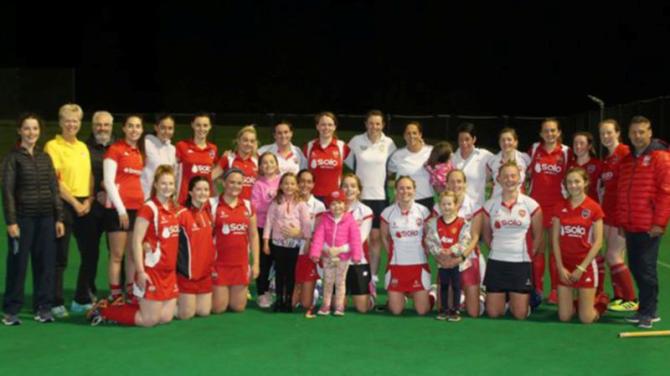 VISITORS Holcombe and Armagh were the winners of the annual Nigel Cheevers Memorial Tournament at Steelweld Park in Cookstown over the weekend.

In the men's section, Lisnagarvey got the competition off to winning ways with a 3-0 victory over hosts Cookstown.

The Hillsborough men then showed a heroic turn, playing their second game of the day against Kent-based outfit Holcombe. A flurry of first half goals was followed by a more even second period with Holcombe posting a 7-0 score.

On Sunday, Cookstown faced Holcombe. The locals held out in the first quarter before the English Premier League men grabbed three goals. Cookstown responded with a score by Scott McCabe, but it was his twin Josh McCabe in goal who really frustrated the English lads, making a slew of saves in the second half. Nevertheless, Holcombe went in with a 5-1 win to retain the trophy they won last year.

The ladies' section saw each side play a lung-busting three matches in one day.

Armagh got the tournament off to a flier with a 2-0 win over hosts Cookstown, who played a match against the Cookstown legends on Friday night, before Raphoe joined them on top of the table with a one-score win over Coleraine.

Coleraine hit back with a 2-0 win against the Reds before the top two, Armagh and Raphoe, played out a scoreless draw.

A 2-0 win for the Donegal team put the pressure on Armagh, but Ian Hughes' players showed their mettle, beating Coleraine by 4-0 to take top spot on goal difference.

The weekend's big game was of course the decider in the Town v Country series and thankfully passed without incident or indeed notable violence. The series was tied thanks to the Town's victory in the softball match and the Country's win in the football.

It looked like it was all over for the Country with the Town racing to a 2-0 lead in the hockey, but somehow the Country team fought back with Ian Hagan deflecting home in the final seconds to make it 4-4. Mitch Greer scored the winning penalty shuffle with aplomb to hand the win and the plaudits to Ashley Gillis’ Country team.

Well done to everyone involved in organising these matches, to the visiting teams, and to everyone who came up to watch.