Blackwater rider Lavery at the double in Kirkstown 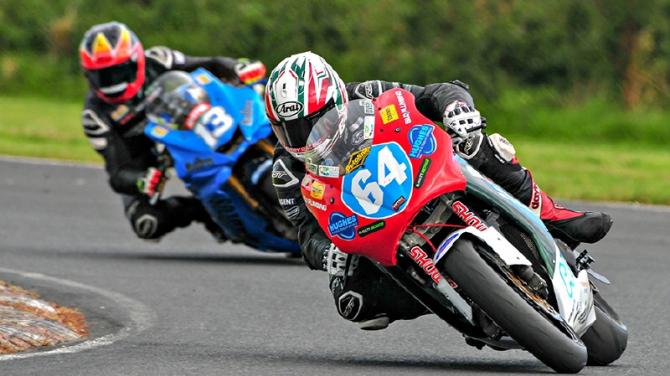 BLACKWATERTOWN’S Kevin Lavery scored his first ever double success when he won both Supertwin races at a sun kissed Kirkistown USBK Meeting.

Son of former road racer Brian Lavery, Kevin took his KMR Kawasaki to a six second win over Gary McCoy in race one.

Race two saw the tow local lads scrap for the lead, but Lavery kept his cool to take victory by a mere three hundredths of a second!

Adam Crooks took 7th in both stock twin races whilst Nathan Cairns took his 450 Aprillia to 6th in both traces and Andrew Cairns 8th and 9th.

McCoy was also in action in the Superbike race, but due to a problem during practice, in which he only got two laps.

The Cookstown rider then had to start at the rear of the grid for both races. Undeterred, Gary scythed through the field to take an amazing 9th just behind fellow local, Stephen McAdoo, both riders improved a place in race two.

Nico Mawhinny, returning from injury took his first win of the season when he snatched a last lap win over Ali Kirk, Kirk turned the tables in race two.

Michael Owens put the disappointment of a first race DNF behind him to take victory in the 600 cup class, and more importantly, finishing 4th in the pro class.

This Saturday sees the final round of the increasingly popular Irish Mini Bike championships at Athboy.

Whilst leading the 600 cup championship, former kart champion, Michael Owens will switch to Pit Bikes, where in the  AJM Car sales Open Championship, he only needs One more point to secure the title and hopefully his first championship on two wheels.

The IMC series promises to be an exciting climax to the season long championship, with each class still up for grabs.

This Saturday, local bike fans have the chance to meet local riders and see many bikes etc, when Clonaneese Church Hall hosts its first ever bike show.

With no competing events in the locality, the organizers are hoping for a good turn out of enthusiasts.

Amongst the bikes on display will be machines as ridden by the late Trevor Ferguson and William Dunlop.

The show opens on Saturday morning at 10am, and runs until 5pm. Funds raised will go towards Church repairs.

North Monaghan & District MCC are holding their annual Classic Bike run this Sunday 15th September starting at the Coach House Bar, Glaslough, Co Monaghan. All ages and classes of motorcycles are welcome on the run and there will also be a static display at the pub from 1.30pm.