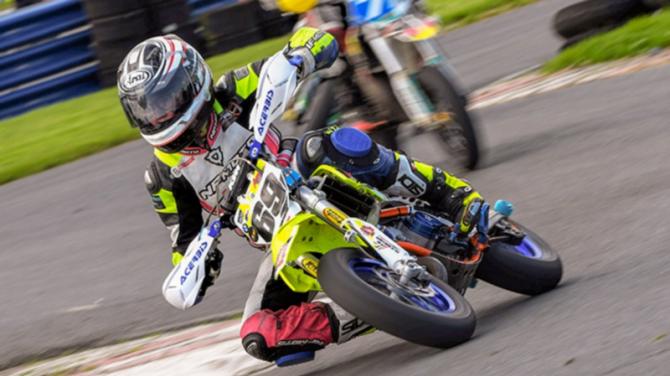 LAST Saturday was the penultimate round of the IMC Summer series of Pit Bike championships at Kirkistown and, as in other aspects of two wheels on tarmac, local riders were to the fore again.

Matthew McCord was in devastating form, taking three wins from three starts. Rookie Lewis Mullen, took two wins and a second place to head into the final with a slender one point lead whilst Michael Owens, combining his 600 Short Circuit cup championship with Pit Bikes, took the overall win in the Open class.

Former Short Circuit Rider Tim Stott made a return on board The Village Carpets KTM85cc – and still managed to get back into his VCM Racing Leathers from 20 years past.

Tawains Roger Chen was having his last competitive meeting before returning to his native home, and was on hand to present the awards.

The final round is at Athboy, September 14th.

However, the big news of the day, was the announcement of the clubs scholarship for 2020.

For a club, still in its infancy, this announcement was further proof of its interest in the future of the sport.

The Irish Minibike Championship caters for youth competitors with an age range of 6-14 years.

Since the birth of the Championship, a mere 18 months ago, it has realised one of its main objectives - growth of the Junior Gearbox grid.

The rise in the level of competition from the youngsters in this class has produced some of the most exciting race action of the 2019 season.

Whilst it is rewarding as a Championship to nurture the abundance of talent, our vision is to provide opportunity for progression - be it through the ranks of the Junior Classes or beyond the confines of The IMC Paddock and into that of the National Racing Championships.

One of the biggest advocates for Motorsport in our wee country shares that vision.

That visionary is Baylon McCaughey. In recognising the recent resurgence of Minibike Racing since the formation of The IMC (of which he has been a valued Mentor), Baylon could see opportunity for a ‘Stepping Stone’.

A stepping stone that will take the youth to the grids of Short Circuit Competition. That stepping stone will be the Introduction of The IMC Scholarship 2020. A joint venture between Baylon McCaughey, The IMC and Misano Imports.

The IMC Scholarship 2020 will include the use of the all new Tianda TDR 300. The bike is a 279cc four stroke race bike which will run alongside the 125cc production machines currently running in the Junior Cup Class within the Short Circuit Championships.

The Tianda TDR 300 has recently been given the Green Light by the MCUI (UC) to compete in the revised Short Circuit Junior Cup 2020 Series.

The Junior Cup Class (to be renamed) is open to competitors from 12 years of age before or on 28th February 2020.

Omagh based Misano Imports are the UK Sole Distributor and all machines will be sold with a Sealed Engine, providing a level playing field of competition.

The chosen recipient will also take on the role of IMC Youth Ambassador.

As Youth Ambassador they will provide advice and encouragement to all our Youth Competitors’ and promote The IMC in a positive manner through their conduct both on and off the track.

An independent panel of five observers have been keeping a watch over the field of eligible Junior Riders’ to select a competitor who shows not only progression in their race-craft but more importantly in their Sportsmanship.

Illustrating determination, commitment and enthusiasm will take precedence over results.

Speaking about the announcement, MCUI (UC) Tarmac Committee Conveyor, Mark Sanlon said: ““It has been 25 years since a new purpose built bike has been introduced to our Short Circuit Championship.

”The inclusion of The Tianda TDR 300 is a major step forward for the National Championships and will be a catalyst for the grow of our grids.

”The IMC Scholarship offers a unique opportunity. We commend everyone involved and acknowledge the efforts of Baylon McCaughey as the driving force. Baylon had the vision for the youth of today crossing over from Minibike Racing to the National Championships, with the hope of producing another World Champion. I witnessed the youth of The IMC Championship in action at Kirkistown – they are the future – and its promising.”