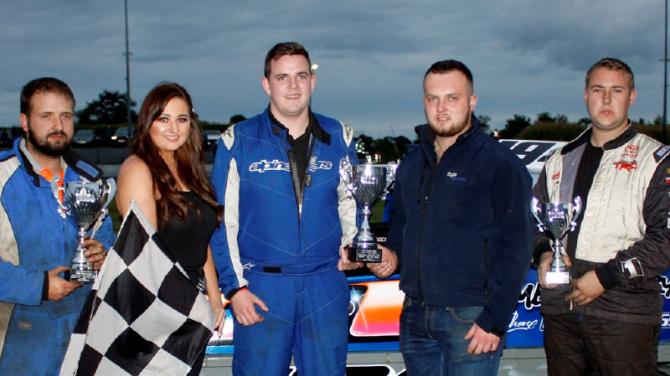 There was drama right from the off in heat one for the Micro Bangers, as Jonny Rutherford was taken headlong into the fence by Deano McGrath. Rutherford rolled over in a huge shunt, but he thankfully escaped unhurt. On the restart Willie McFaul took the win for Bad Company B ahead of Leonard Dunn of Bad Company A. Heat two saw a huge wrecking train on the Tullyroan Bend with some monster hits going in, but out front William McFaul Jnr and Dunn were contesting the lead. McFaul sent Dunn sliding into the turn four chaos on the last lap to take the win for Bad Company B.

The final saw Dunn out front chased by McFaul Jnr. William made his move into the last bend but sensationally missed and landed into the parked car of Adam Maxwell! Dunn took the flag over Team Sour’s Jack Kennedy and Steven Bolton of Team TBG. That left just the Destruction Derby to go with a number of teams still in contention. It was dominated by the Team Sour drivers with welcome English visitor Marc Key coming out on top after finishing off Paul Stafford. Overall Bad Company A took the honours ahead of a tie for second between Team Sour B and Bad Company B.   Rutherford took the Best Wreck trophy for his early heat one smash, whilst Tony Gillespie captured the Entertainer of the Day award.

The Stock Rods were contesting the second round of the Butler Motorsport Challenge Series, with Adam White racing to a clear win in heat one over Stuart Agnew and Jordan McCann. White then repeated the feat in heat two, edging past Agnew late on to grab the win over Agnew and Jonny Cardwell, after Dan Shannon was docked from third for contact.

The opening exchanges to the final were frantic to say the least, with a number of penalties handed out for some very untidy driving. Shannon earned himself a disqualification for his troubles as McCann went ahead until challenged by White. As they tripped over each other, National and Irish Champion Curtis Greer accepted the gift of the lead and raced home to the chequered flag for a fine win. Cardwell, Shane McMillan and Derek McMillan chased him across the line.

Gareth Halliday set the pace in the opening 1300 Stock Cars heat, before Jamie McCann bumpered his way past to win in the closing stages. Robbie Wright’s last bend lunge on Halliday saw him grab second ahead of Josh McKinstry. It was Ryan Stewart who took the second heat honours ahead of McKinstry.

McCann was on pole for the Tullyroan Challenge Cup final, and the opening couple of laps were truly fantastic with the bumpers exchanged in no uncertain terms. Wright worked his way ahead, with Stewart coming through to second, whilst the rest battled hard over third. It was Wright who easily took the win over Stewart, with Calvin Blake the best of the battling rest in third.

Alex Milligan impressed all evening in the Junior Productions, racing ahead in the opener only to lose out late on to a flying Sam Percy. Milligan did well to fend off Graham Meek for second on the line. Heat two again saw Milligan out front, this time losing out the lead with just four laps to go as Percy swooped past in style to complete his double and earn a rise to the red grade for the final.

The upgrade for the final didn’t deter young Percy at all, and he quickly got the bit between his teeth early on to chase down the frontrunners. Sam has been improving greatly in recent times, and he was able to slice past Milligan to take it up just past the half way mark to record the perfect hat-trick of wins. Sam McNeice came through to second ahead of Irish Open Champion Mark Crawford.

European Champion Steven Haugh reeled off a faultless hat-trick in the ProStocks, which featured debuts for Jonny Peoples and Gary Gamble. Steven led Joe Largey and Sam Stewart home in heat one, before heat two saw the same podium finishers. That one ended up in controversy as a heavy fencing of Rab Wharry led to Dylan Booth being loaded up from the remainder of the evening. Haugh then took an easy final win too ahead of Largey and Stewart.

The next Tullyroan Oval meeting is on Saturday 10th August featuring Back to Basics Bangers, Superstox, 2.0 Hot Rods, Junior Productions and ProStocks.