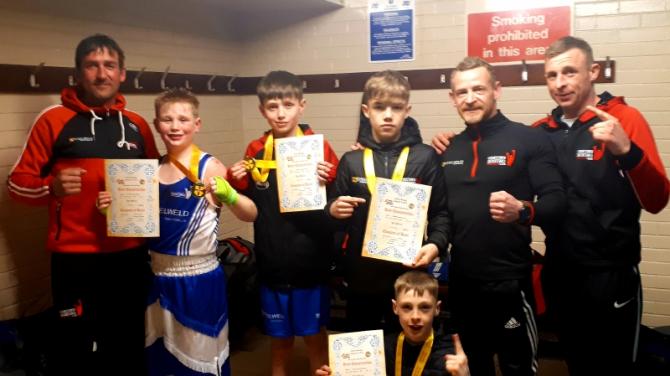 COOKSTOWN Boxing Club made Mid-Ulster proud on Sunday as they took a clean sweep of titles at the Boys 1/2/3 Ulster Championships held in Londonderry.

The club entered four fighters and took four wins, This was a fantastic achievement for the club.

First up for the club was M. Magee and this kid, in his first year of Championship boxing, is proving to be some fighter.

Magee listened to his coach Chalky Kelly went out and, carrying on from his last bout, completely overwhelmed his opponent to win his fight in the first round.

This is his third stoppage in these Championships, next up was defending champion S. Maughan and this performance showed why  he deserve to be a champion.

Maughan took the bout to his opponent and forced the referee to stop the bout in his favour in the second round.

On this performance, it is going to take some kid to beat him.

Next up was ‘the Raging Bull’ B. McDonagh and he duly supplied another big performance.

Defending champion McDonagh took command of this bout early in round one and never looked back as he blasted his way to the title.

Next up was Paul ‘Pocket Rocket’ Corr who got his title on a walkover, this was a huge disappointment for young Corr as his opponent failed to make the weight.

The magnificent four march on to the next rounds of the Irish Championship which will be held in Dublin over the Easter week.

Boxing in new colours, it is hoped the club will be able to bring home these titles and crown a sensational year.