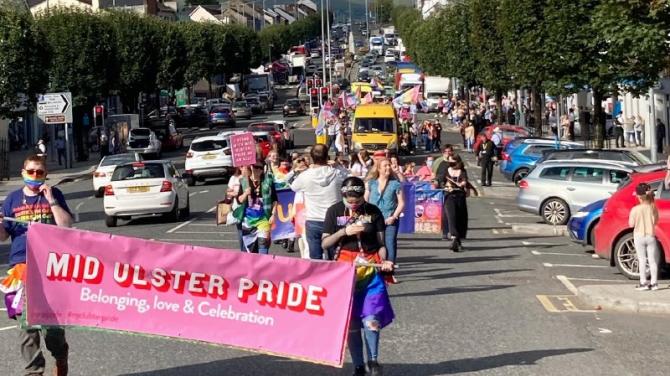 THE Mid-Ulster Pride event took place in Cookstown last Saturday with a protest attracting only a small crowd.

Dozens of members of the LGBTQ community and supporters took to the streets of the market town for the celebration which made headlines when it was held for the first time last year.

The three-hour event saw people of all ages and backgrounds come out to support those parading, including clergy and local politicians including Mid-Ulster Council deputy chair Christine McFlynn of the SDLP.

"We hope all of those who attended felt love, that their identity was celebrated and that they have somewhere to belong now. We only hope to grow, to have more events and with COVID 19 regulations easing, we plan on doing more in person events such as coffee mornings, movie nights and more.

"We want to keep the community engaged, we want them to feel heard and feel understood. That is why we walk through Cookstown, that is why we have the parade. And it's only upwards from here. Once more, thank you to everyone who attended for your support, love and pride."

A protest against the event had been planned with 80 people expected for a counter demonstration according to an application lodged with the Parades Commission.

Around 20 people from Christians Opposed to Rural Pride did mount a protest as the parade passed, with another 10 men observing the procession holding a statue of the Virgin Mary.

The planned protests had drawn criticism even before the event had taken place, with SDLP MLA Patsy McGlone calling for them to be abandoned.

“This intolerance has no place in Mid-Ulster and in no way reflects the view of the community here,” he said last week.

Free Presbyterian minister Rev Marcus Leckey, organiser of one of the counter demonstrations, hit back at the claims saying they had a right to hold a protest against the event.

Mid-Ulster Pride addressed the possibility of a counter demonstration on its website before the event.

It said: “Our existence should not be a contentious issue for anybody and we deserve to be treated equally. Yet we are to expect Catholic Action and the Presbyterian Church to picket our hard fought achievements and promotion of love and acceptance which is exactly why marches like these around the world are important.”

Mid-Ulster Pride chairman Joshua Cuddy has said he is both gay and a member of the Orange Order, adding: “My lodge knows exactly who I am, what I am and what I do. They have said nothing to me.

"“All I want is to create a Mid-Ulster where people can live together regardless of what form of sexual expression or gender expression or conservative views.”