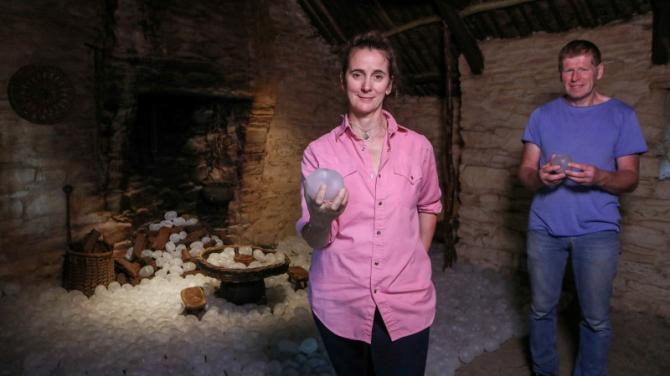 AN Irish Potato Famine memorial, made up of 1,845 handblown glass potatoes, is currently on display at the Ulster American Folk Park.

Titled “1845: Memento Mori”, the installation is by Seattle-based Irish artist Paula Stokes and arrives in Omagh following time at both Strokestown Park House in Roscommon and Johnstown Castle Estate in Wexford.

The title of the project references the year that the potato blight came to Ireland, marking the beginning of a period of mass starvation, disease, and emigration.

A fitting setting for the installation, the Ulster American Folk Park is the only location in Northern Ireland that will host the exhibition. The living history, open-air museum, brings to life the stories of those who emigrated from Ulster to America in the 18th and 19th centuries.

Paula said: “As a modern-day member of the Irish Diaspora, I have reflected on my own history as an immigrant to examine historical events that have shaped the present. I hope that this installation will open a dialogue on how one can learn from the past, and that it might elicit compassionate reflection that transcends the polarizing politics of our current time.”

The form of the installation differs in response to specific locations, changing shape and volume depending on light, accessibility, and exposure of each site.

In previous installations it has taken the form of a cairn, or traditional stone pile.

At the Ulster American Folk Park, it will be installed in the Single Room Cabin, which dates from the late 1700s to early 1800s and is an example of the type of dwelling occupied by many poor tenant farmers.

Liam Corry, Curator of Emigration at Ulster American Folk Park, said: “As a museum dedicated to telling the story of those who emigrated from Ulster to America in the 18th and 19th centuries, we are delighted to host such a tangible symbol of the Irish Potato Famine.

“At National Museums NI, we believe that learning and inspiring curiosity is a lifelong activity, and this exhibition helps us to communicate the story of emigration in a creative and engaging way to a new generation.”

The project has been generously supported by the Thomas Dammann Junior Memorial Trust and is displayed in partnership with Craft NI for August Craft Month.

The 1845: Memento Mori exhibition is included in the general admission to Ulster American Folk Park and will be on display until November 7th.